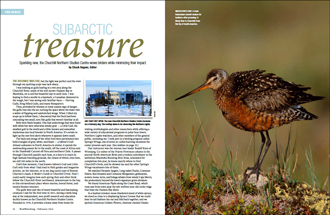 The distance was far, but the light was perfect and the view through my spotting scope was tack-sharp.

I was looking at gulls loafing in a wet area along the Churchill River, south of the still-snowy Hudson Bay in Manitoba, on a cool but beautiful day in early June. I was hoping to find a needle in a haystack, a Canadian diamond in the rough, but I was seeing only familiar faces — Herring Gulls, Ring-billed Gulls, and many Bonaparte’s.

Then, provoked by whimsy or some unseen sign of danger, the gulls rose into the air, turning the space above the water into a welter of flapping and outstretched wings. When I tilted my scope up to follow them, I discovered that the flock had been concealing two small, tern-like gulls that weren’t familiar at all.

Both were black-headed. One had underwings that were lined with white but were otherwise smoky gray — a Little Gull, the smallest gull in the world and a little-known and somewhat mysterious rare local breeder in North America. It’s certain to light up the rare bird alerts whenever it appears down south.

The back and wings of the other bird were partitioned into bold triangles of gray, white, and black — a Sabine’s Gull. Almost unknown in North America in winter, it spends the nonbreeding season far to the south, off the coast of Africa and in the Humboldt Current off Peru and northern Chile. It passes through Churchill quickly each June, in a hurry to reach its high-latitude breeding grounds, the closest of which, even here, are still 300 miles to the north.

Until that moment, I had known Sabine’s Gull and Little Gull only from what I had read in field guides and magazine articles, on the Internet, or in my dog-eared copy of Bonnie Chartier’s classic A Birder’s Guide to Churchill (1994). Now I could easily imagine how each spring they and other birds follow the Churchill River northward, downstream to the bay, to this extraordinary place where marine, boreal forest, and tundra biomes intersect.

The gulls were just two of many beautiful and fascinating creatures I saw for the first time in 2012, during a week-long stay at the independent, non-profit research and education facility known as the Churchill Northern Studies Centre. Founded in 1976, it provides a home away from home for visiting ornithologists and other researchers while offering a wide variety of educational programs to polar bear lovers, Northern Lights watchers, and other members of the general public, including me. I took part in a birding program called Spring’s Wings, one of seven so-called learning vacations the center presents each year.

Our instructor was the veteran tour leader Rudolf Koes of Winnipeg. Co-editor of the Prairie Provinces column in the journal North American Birds and a tireless contributor to the ambitious Manitoba Breeding Bird Atlas, scheduled for completion this year, he knew exactly where to find Churchill’s birds, and he showed me and the other Spring’s Wings vacationers lots of them.

We found American Pipits along the Coast Road, which runs east from town atop the 600-million-year-old rocky ridge that lines the Hudson Bay shore.

In a hushed reindeer-moss-blanketed stand of white spruce, we stood so close to a displaying Spruce Grouse that we could hear its tail feathers fan out and fold back together, and we spotted American Golden-Plovers, chestnut-chested Hudsonian Godwits, twirling Red-necked Phalaropes, and other shorebirds in the wet marsh and boggy area south of the CNSC.

We saw redpolls, Boreal Chickadees, and Pine Grosbeaks at feeders stocked by a Churchill resident. We watched a pair of Short-eared Owls fly low over a landscape littered with the hulks of fallen rockets. (The center is located on the site of an abandoned Canadian National Research Council launch complex 14 miles east of town.) And one evening, at a pump station at the end of the long road where I had earlier marveled at the Sabine’s and Little Gulls, we were treated to an even bigger surprise — a Northern Wheatear.

Among all the passerine birds that breed in North America, the wheatear is thought to be the only one that spends its winters in Africa, after migrating either westward across all of Asia or eastward across the Atlantic Ocean. The American Birding Association assigns it to Code 2, categorizing it among species that occur regularly (and one did show up recently, on October 19, 2013, at Peckham Farm in Kingston, Rhode Island), but in Churchill it’s a very rare migrant.

Our wheatear, a buffy female viewed in the prolonged daylight of a subarctic spring evening, was certainly one of the highlights of our week. Koes told me later that, in more than 30 years of visiting Churchill, he had never spotted one.

PEREGRINE FALCON
Read how researchers on Hudson Bay are changing our picture of the prince of birds.

Another highlight was rubbing shoulders with the thoughtful young climatologists, geologists, ornithologists, and other scientists who use the CNSC as their base while conducting research in the western Hudson Bay region. One of them, Nathan R. Senner, a PhD candidate at the Cornell Lab of Ornithology, has been comparing the migrations of Hudsonian Godwits captured at Churchill with those of godwits that nest in south-central Alaska.

As Senner wrote in The Auk in October 2012 (and as we reported in “Birding Briefs” in our February 2013 issue), his findings indicate that the effects of climate change are not being felt evenly across the globe: Birds that breed in Alaska are now arriving almost nine days earlier than they did in the early 1970s, while the population that nests at Churchill is arriving 10 days later. The result, he concluded, is an ominous mismatch between the shorebird’s arrival time and the resources it relies on to breed successfully.

A colleague of Senner’s from the Cornell Lab, Andy Johnson, was conducting similar research while I was at CNSC, but on a different species. He was studying the Whimbrel, a long-billed long-distance migrant, an abundant breeding species in Churchill, and one of the most conspicuous shorebirds of the subarctic. Every day, he and Johanna Perz, a graduate student from Trent University in Peterborough, Ontario, hiked out onto the tundra or into the sedge fen south of the center in search of nests.

Their objectives, Johnson told me, were to learn as much as they could about the habitats the shorebirds choose as their nest sites, the abundance of the insects the birds gobble up while breeding, and the timing and route of their perplexing and fascinating annual migrations.

Like Hudsonian Godwits, Whimbrels breed in discrete populations — in Alaska and Yukon Territory in the west, and along Hudson Bay in the east. Birds from the two groups follow separate paths while migrating, and they apparently don’t mix during the winter. We know that some Whimbrels fly as much as 2,400 miles (4,000 km) over the open ocean to reach South America, but little is known about their coastal staging sites, except that they are disappearing fast. If, or how, that loss, combined with climate change, will affect the species is a story I’m confident that Johnson and Perz will piece together shortly.

Like the other members of the Spring’s Wings learning vacation, I was grateful to have the opportunity to learn about their fascinating research firsthand. But I found it just as valuable to be able to sleep and eat in the just-opened facility that makes such work possible.

A model of sustainability

For years, the Churchill Northern Studies Centre had housed scientists and visitors like me in cramped administration buildings left over from the days when the site was used to launch Black Brants and other sounding rockets into the upper atmosphere. But in the summer of 2011, the CNSC moved into a gleaming 27,800-square-foot facility that not only accommodates 88 visitors and 12 year-round staff members but serves as a model of sustainability for future developments in other remote, fragile communities.

Designed to showcase the best green building practices, the new building sheds snow, collects sunlight, and safely discourages the photogenic but dangerous polar bears that come off the bay when the ice breaks up in July and then congregate in and around Churchill in October and November.

Freezer-panel construction and argon-filled, triple-glazed windows keep out the wind, which blows so relentlessly that it allows branches to grow only on the leeward side of trees. (The locals call them flag trees.) Timers, carbon-dioxide sensors, and other intelligent controls keep energy use low. No-flush composting toilets, shower timers, and other innovative technologies decrease water consumption far below the national average.

The building has laboratories, classrooms, a cafeteria, and an herbarium, and a heated rooftop dome permits observation of the aurora borealis in comfort. I left enchanted and inspired — and not just because I spotted Pacific Loons, Willow Ptarmigans, snowshoe hares, and Arctic foxes all from the window of Room No. 4.

Air-tight but still open, hard-working yet attractive, serious and playful, the building offers a persuasive answer to an important question sure to be asked by anyone who wants to increase awareness of the world’s most precious places: How do you accommodate visitors in a way that minimizes their impact? How can you increase knowledge without harming what you’re studying? How do you share wonder without snuffing it out?

As I now know, it can be done.

Chuck Hagner is the editor of BirdWatching magazine.

Other articles by Chuck Hagner:

Seabirds by sail in the Gulf of Maine.

Birding and gorilla tracking in Uganda in East Africa.

Birdwatching at the Copper River Delta in Alaska.