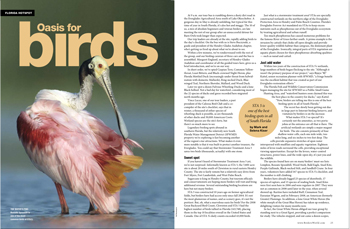 At 9 a.m. our tour bus is rumbling down a dusty dirt road in the Everglades Agricultural Area south of Lake Okeechobee. A gorgeous day in May is already unfolding, but typical for this time of year in South Florida, it’s also hot and muggy. The 10 of us, a mix of absolute beginners and veteran birders, are late meeting the rest of our group after an unsuccessful detour for Barn Owls took longer than expected.

Our trip leaders are already at the site, rapidly adding birds to the day’s checklist. On the bus with us is Steve Buczynski, a guide and president of the Hendry-Glades Audubon chapter, who’s getting us fired up about what we’re about to see.

Within a few minutes, we’ve rendezvoused with the rest of the group, and our birding caravan of three cars and the bus is assembled. Margaret England, secretary of Hendry-Glades Audubon and coordinator of all the guided tours here, gives us a brief introduction, and we’re on our way.

Later we spot a dozen Fulvous Whistling-Ducks and a lone Black-bellied. Not a bad day for waterfowl, considering most of the 22 species of ducks and geese recorded here migrated north months ago.

Vince Lucas, one of our tour leaders, a past president of the Caloosa Bird Club and a co-compiler of the site’s checklist, says that in winter, a thousand of either species of whistling-duck is possible, as are thousands of other ducks and 30,000 American Coots. Wetland species are the site’s forte, but there’s so much more to see.

Legendary birding spots abound in southern Florida, but the relatively new South Florida Water Management District (SFWMD) property we’re exploring is fast becoming another of the region’s star attractions. What makes it even more notable is that it was built to protect another treasure, the Everglades. You could say that Stormwater Treatment Area 5 saves two birds (thousands, actually) with one stone.

STA 5 is stop number 47 on the south section of the Great Florida Birding Trail.

If you haven’t heard of Stormwater Treatment Area 5 yet, we’re not surprised. Informally known as STA 5, the 7,680-acre site is about 20 miles south of Clewiston in rural eastern Hendry County. The site is fairly remote but a relatively easy drive from Fort Myers, Fort Lauderdale, and West Palm Beach.

Sugarcane is king in Hendry County, but tourism officials and conservationists are hoping more birders will visit and bring additional revenue. Several outstanding birding locations are here but not many birders.

STA 5 was constructed 10 years ago on former agricultural fields, but birders have had access only since fall 2004. It’s not the most glamorous of names, and as scenery goes, it’s not the prettiest. But, oh, what a marvelous oasis for birds! For the 2008 Great Backyard Bird Count, Clewiston and STA 5 had the highest number of birds tallied in Florida (143,748), placing them in the top 10 localities overall in the United States and Canada. One of STA 5’s daily counts exceeded 43,000 birds.

Just what is a stormwater treatment area? STAs are specially constructed wetlands on the northern edge of the Everglades Protection Area in Hendry and Palm Beach Counties. Florida’s Everglades Forever Act mandated six STAs to keep excess nutrients such as phosphorous out of the Everglades ecosystem by treating agricultural and urban runoff.

Too much phosphorous has caused numerous problems for the famous River of Grass farther south. A prime example is the invasion by cattails that choke off open sloughs and provide lower-quality wildlife habitat than sawgrass, the dominant plant of the Everglades. Ironically, integral parts of STA vegetation are aquatic plants chosen for their phosphorous-absorbing qualities — such as naiad and cattail.

Within two years of the construction of STA 5’s wetlands, large numbers of birds began flocking to the site. “Although it wasn’t the primary purpose of our project,” says Bijaya “BJ” Kattel, senior recreation planner with SFWMD, “a fringe benefit was the excellent habitat that was created as part of our Everglades-restoration efforts.”

The Florida Fish and Wildlife Conservation Commission began managing the site for SFWMD as a Public Small Game Hunting Area, and “waterfowl hunters soon claimed this was the best place in the country for ducks,” says Kattel. “Now, birders are telling me this is one of the best birding spots in all of South Florida.” The secret has slowly been getting out due in large part to Internet birding listservs, and visitation by birders is on the increase.

What makes STA 5 so special? It’s certainly not the amenities, as two portajohns at the entrance are all that is there. The artificial wetlands are simply a major magnet for birds. The site consists primarily of four shallow-water cells, each one mile wide, two miles long, and six inches to two feet deep. The cells provide expansive stretches of open water interspersed with mudflats and aquatic vegetation. Eighteen miles of levee roads surround the cells, providing exceptional viewing opportunities. Except for the levees, water-control structures, power lines, and the wide-open sky, it’s just you and the wildlife.

Birders have already logged 23 species of shorebirds, 17 species of raptors, and 15 species of wading birds. Snail Kites were first seen here in 2006 and were regulars in 2007. They were not as common in 2008 until later in the year, when several showed up. Rarities have included Ruff, Cinnamon Teal, Eurasian Wigeon, and in February 2008, an American (formerly Greater) Flamingo. In addition, a lone Great White Heron (the white morph of the Great Blue Heron) has taken up residence, delighting visitors for many months now.

In fact, the Great White Heron obliged our tour group by standing next to a Great Egret, providing a perfect comparison for study. The vehicles stopped, and out came a dozen scopes, quickly set up along the levee. We all had excellent views, as Steve pointed out the differences between the two handsome white waders. Our next stops produced a flock of 160 Black Skimmers at rest on the mudflats and 35 Stilt Sandpipers feasting before their long journey back north to the arctic. Near the conclusion of our visit, we came across more than 100 feeding Roseate Spoonbills, always a crowd pleaser and a fitting end to a marvelous tour.

The heat is on

South Florida’s warm climate makes winter birding particularly enjoyable. With the influx of waterfowl and shorebirds, the winter months really showcase the species diversity and sheer numbers of birds that STA 5 has to offer. If you can manage only one visit, October through March is the best time to go.

Some of our favorite winter visitors are Northern Pintail, Northern Harrier, Marsh Wren, American Avocet, and Tree Swallow. On a tour in March, we were greeted by hundreds of acrobatic Tree Swallows patrolling the adjacent fields, gulping insects. A pair of Peregrine Falcons stared down at us from atop a power pole, while a Snail Kite cruised for apple snails just around the corner.

Spring and fall have their fair share of migratory treats, including many shorebirds and songbirds. On our May tour, we encountered a late flock of 50 Bobolinks and enjoyed dazzling, up-close looks at several males.

If you don’t mind heat and humidity, late spring and summer (April through September) can be quite fruitful. The antics of Purple Gallinule, Black-necked Stilt, and Least Bittern, all of which breed here, are sure to please. Overhead, you might spot a Swallow-tailed Kite circling or Cliff Swallow rocketing by, or if you’re really lucky, a King Rail will dart out of the grass to its next hiding place. The gangly Limpkin, with its blood-curdling call, is a perennial favorite anytime of year; seven of them were on hand to entertain us this past trip.

Also part of the STA 5 experience is Blumberg Road, an 11-mile-long paved and dirt road that cuts through agricultural fields to the entrance gate. (STA 5’s checklist area includes the road.) Audubon’s Crested Caracara (the subspecies found in Florida) and Barn Owl are often present, and Western Kingbird and Scissor-tailed Flycatcher can be found in winter. On our May visit, we heard Northern Bobwhite and Eastern Meadowlark calling from adjoining fields in the morning, and on the return trip, four Common Nighthawks perched on utility wires.

The overall diversity at STA 5 is amazing. You just never quite know what might turn up. Greater White-fronted Goose, Black-throated Blue Warbler, Yellow-billed Cuckoo, Cave Swallow, Swainson’s Hawk, Painted Bunting, and Bonaparte’s Gull have all been spotted. Vince, Margaret, and other birders encountered a flock of 750 to 1,000 American White Pelicans in June 2008, more than are usually seen here in winter. On many trips, participants see more than 200 Roseate Spoonbills, resplendent in their pink finery. Eleven warbler species have already been recorded — not bad for a site with very few trees.

Part of STA 5’s charm is that birds are so abundant. In winter, expect thousands of ducks, geese, and coots, and 120 species in a day is possible. Bring a spotting scope because the birds aren’t always close to the roads — those water cells are quite large!

On caravan tours, however, scopes are usually abundant and available for sharing if you don’t have your own. Watching birds from the levees in a group tour with knowledgeable guides is about the easiest kind of birding there is. The leaders simply stop the vehicles wherever a good opportunity presents itself, which is often. It’s eye-candy birding at its finest. If you are looking to introduce someone to birding, STA 5 is an ideal place to do it.

Of course, with something this good, there must be a catch. STA 5 is accessible at present only on the Saturday guided tours led by Hendry-Glades Audubon in partnership with the Clewiston Inn. In the past, 10 to 15 tours were offered per year. For 2009, 18 tours have already been scheduled to meet the rising demand. The April 4 tour coincides with the Big Okeechobee Birding Festival (April 3-5) in Clewiston. On May 9, International Migratory Bird Day, Margaret England is leading a North American Migration Count and urges volunteers to come out. Summer tours (one per month) are also offered.

Tour sizes have ranged from four to nearly 100 people, and trips generally last from 8:30 to noon, although some run longer. Carpooling is encouraged, and levee roads are suitable for walking, bicycles, and any type of car. Waterfowl hunting is limited to 10 days in winter (November through January), and hunts do not take place when birding tours are scheduled.Due to the heightened interest in the site, SFWMD plans to open the property to the birding public, possibly as early as 2010. At that point, visitors will have foot and bicycle access Friday through Monday, from dawn until dusk. Whether auto caravan tours will be permitted has yet to be decided. Don’t expect much more in the way of amenities, however; basic facilities will include an information kiosk, a parking lot by the entrance gate, and a dry vault toilet. Fear not, though, what STA 5 lacks in comforts, it more than makes up for with great birding! This is one Florida hotspot you won’t want to miss.

Mark Kiser is the coordinator of the Great Florida Birding Trail, a program of the Florida Fish and Wildlife Conservation Commission. He wrote about Tosohatchee Wildlife Management Area, Christmas, Florida, Hotspot Near You No. 37. Selena Kiser also works for FWC as a planning and evaluation specialist for the Birding Trail and Wildlife Viewing Section. The Kisers have led birding walks throughout Florida. Together they wrote about Clyde Shepherd Nature Preserve, Decatur, Georgia, Hotspot Near You No. 92.

Learn about birdwatching spots in Canada’s most populous province.

Learn about great hotspots in the Quaker State.