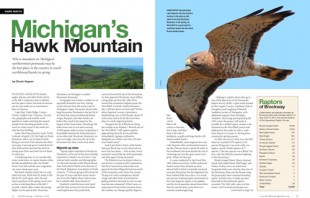 Watching migrating hawks, eagles, falcons, and other birds of prey in the fall is a pleasure and a tradition, and the places where the birds of autumn can be seen easily are as venerated as they are famous.

Cape May. Hawk Ridge. Corpus Christi. Golden Gate. Veracruz. At each one, geography and weather work together to make watching the annual parade from breeding grounds in the north to winter areas in the south not only fun but thrilling.

Some, like Pennsylvania’s rocky North Lookout, situated 1,521 feet high on Hawk Mountain, allow you to observe birds flying at eye-level. One autumn day there years ago, I not only got to watch Red-tail after Red-tail but also had the thrill of seeing more than one hawk turn its head to watch me.

Considering that, it’s no wonder that come wintertime, we raptor fanatics often feel like baseball fans after the World Series. Next fall, and the next migration, can seem a long ways away.

But hawk watchers don’t have to wait until next year. Birds that fly south in the fall do fly north again, after all, and observing them in the spring can be just as fun as watching them in the fall. I recently visited a place where the spring flights can be spectacular: Brockway Mountain, on Michigan’s wooded Keweenaw Peninsula.

Geography and weather combine in an especially beautiful way here. Jutting north and east from the north coast of Michigan’s Upper Peninsula, the 60-mile-long Keweenaw Peninsula is the last bit of dry land that many northbound Broad-wings, Sharpies, and other hawks see before they reach Lake Superior, the largest of the Great Lakes. Stretching 350 miles from west to east and covering 31,820 square miles in area, it represents a formidable obstacle for birds that breed on its other side. Brockway Mountain, an east-west ridge, rises near the tip of the Keweenaw less than a mile from shore.

“Spring raptor migration at Brockway Mountain can be one of the most exciting experiences a birder can ever have,” says veteran hawk watcher and photographer Vic Berardi, founder of the Illinois Beach State Park Hawk Watch and a director of the Hawk Migration Association of North America. “I’ve been going to Brockway for the past 10 years and have many memories of terrific flights where raptors pass by at unbelievably close distances.”

Southerly winds between mid-April and late May account for the best hawk watching because they push birds eastward toward the tip of the Keweenaw. As they approach Brockway, many follow a long slope up from the valley floor toward the mountain’s highest point, the West Bluff. Located a Hawk Mountain-like 1,328 feet above sea level and 728 feet above Superior’s waves, it provides a breathtaking view of Isle Royale, about 50 miles away, and is by far the area’s best place to watch migrating hawks.

“Imagine the tip of Brockway being the cockpit of an airplane,” Berardi says of the West Bluff, “with raptors quickly approaching directly at you and then immediately zipping overhead or alongside you within a few feet. It’ll take your breath away!”

And it gets better: Many of the hawks that pass Brockway can be observed not once, but two times — first as they travel eastward, toward the tip of the peninsula, and then again, flying westward.

Listed below are species recorded at ­Brockway Mountain between March 15 and June 15, 2011, the second season of the Keweenaw Raptor Survey.

The behavior was exciting to observe, and at first it seemed to defy explanation. But then I lowered my binoculars and gazed at the lake filling the horizon north of the mountain, and I knew the reason: Flying over water is dangerous. Broad-wings and other birds accustomed to gliding find few thermals to soar on and may become exhausted. What’s more, as experienced Great Lakes mariners know, the weather can change quickly. Raptors, like boats, can be blown off course or become lost in fog. And then there’s the risk of predation, as gulls and large hawks will attack smaller hawks.

Where do they go?

Undoubtedly, some migrants do cross Lake Superior after reaching Keweenaw’s tip (the Ontario shore is about 90 miles to the northeast), but most decide the risk of venturing out over the open water is too great. Where do they go?

A count conducted in April and May 1992 tallied more than 15,000 eastbound hawks, better than 36 birds an hour, almost half of which eventually returned west past Brockway, but the migration has been studied little since then. As a result, our picture of spring raptor movements in the Lake Superior region is incomplete, and the list of questions about those birds that fly east but don’t come back west remains tantalizingly long.

Helping to explain where they go is one of the objectives of the Keweenaw Raptor Survey (KRS), a pilot study funded by the Copper Country Audubon Club of Houghton and Laughing Whitefish Audubon Society of Marquette, with additional support from Michigan Audubon. Mirroring and expanding the 1992 count, the project will make it possible for a skilled raptor counter to be stationed on the West Bluff, pencil and clipboard at the ready, six days a week from March 15 to June 15, during three consecutive spring seasons.

In 2010, the survey’s first year, the KRS observer counted 9,579 raptors of 16 species flying east. Last year’s tally was higher, exactly 14,000 raptors of 17 species. (The new species was a Black Vulture, only the fifth documented sighting in the Keweenaw.)

Broad-winged Hawk, Sharp-shinned Hawk, Red-tailed Hawk, Bald Eagle, and Turkey Vulture were recorded most frequently both years, but the clear star of the Brockway show was the Broad-wing, the peninsula’s most common breeding raptor. In both years, it made up more than half of all eastbound raptors recorded. The 2011 tally came to 9,346 hawks, 1,613 of which jetted past on a single day, May 5, when favorable winds blew from the southwest or south-southwest. A total of 4,905 Broad-wings were recorded in 2010.

As big as these figures are, they look small when compared with the numbers of waterbirds counted each spring. More than 17,000 Canada Geese flew over the peninsula in 2010 — 12,000 of them on one day, April 12 — and counter Arthur Green recorded 20,625 honkers last year. Hundreds of Common Loons and Sandhill Cranes, and dozens of passerine species are recorded each spring as well. If you consider them along with the raptors — and with an entertaining pair of Common Ravens that has nested successfully on the mountain two years straight — it becomes simple to see why the American Bird Conservancy designated the site an Important Bird Area.

A paved road lined by a low stone wall makes it a snap to drive from the nearby town of Copper Harbor up to the West Bluff. Consider it along with Copper Harbor’s annual month-long migratory bird festival (www.copperharborbirding.org), and you might assume that the hawk watch sits on public land. In fact, access to the mountain is not a right, but a privilege extended to birdwatchers and lake lovers out of the generosity of the private family that has owned it for generations and recently signaled a desire to sell.

Fortunately, Eagle Harbor Township has stepped forward with Copper Country Audubon, the Michigan Nature Conservancy, the Houghton Keweenaw Conservation District, the Keweenaw Land Trust, and other organizations to purchase the mountain, thereby protecting the summit from development and allowing public access in perpetuity. Information is on the Eagle Harbor Township website.

Chuck Hagner is the editor of BirdWatching.

Other articles by Chuck Hagner:

Seabirds by sail in the Gulf of Maine.

Birding and gorilla tracking in Uganda in East Africa.

Birdwatching at the Copper River Delta in Alaska.