Become a member and get exclusive access to articles, contests and more!
Start Your Free Trial
BirdWatching  •  Locations & Travel  •  Featured Destinations  •  Kettle as big as Texas 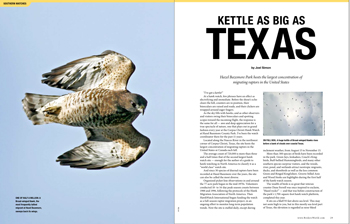 At a hawk watch, few phrases have an effect as electrifying and immediate. Before the shout’s echo clears the hill, counters are in position, their binoculars are raised and ready, and their clickers are wrapped around eager fingers.

As the sky fills with hawks, and as other observers and visitors swing their binoculars and spotting scopes toward the incoming flight, the response is the same for all — awe and deep appreciation for a true spectacle of nature, one that plays out in grand fashion every year at the Corpus Christi Hawk Watch at Hazel Bazemore County Park. I’ve been the watch coordinator there for the past 11 years.

Located along the Nueces River in the northwest corner of Corpus Christi, Texas, the site hosts the largest concentration of migrating raptors in the United States or Canada each fall.

The average count of 720,000 is more than three and a half times that of the second largest hawk watch site — enough for the author of a guide to hawk watching in North America to classify it as a “world class” watch site.

And since 30 species of diurnal raptors have been recorded at Hazel Bazemore over the years, the site can also be called the most diverse.

Organized picket-line observations in and around the 77-acre park began in the mid-1970s. Volunteers conducted 10- to 14-day peak-season counts between 1988 and 1996, following the protocols of the Hawk Migration Association of North America. Then HawkWatch International began funding the watch as a full-season raptor migration project, in an ongoing effort to monitor long-term population trends. Now the site is staffed daily, except during inclement weather, from August 15 to November 15.

More than 300 species of birds have been recorded in the park. Green Jays, kiskadees, Couch’s Kingbirds, Buff-bellied Hummingbirds, and many other southern species surprise visitors, and the woods, river, pond, and wetlands attract neotropic migrants, ducks, and shorebirds as well as the less common Green and Ringed Kingfishers. Groove-billed Anis and Wood Storks are highlights during the first half of the hawk-watch season.

The wealth of birds is so great that veteran counter Dane Ferrell was once inspired to exclaim, “Hazel rocks!” — and that was before construction of the park’s 1,700-square-foot hawk watch platform, completed this year.

It sits on a bluff 93 feet above sea level. This may not seem high to you, but in this mostly sea-level part of Texas, the elevation is regarded as nose-bleed territory.

What’s more, the platform affords a 200-degree view to the north; it has water, electricity, and Wi-Fi access; it deters pesky insects; and it provides shade and catches breezes to keep things cooler. (That’s cooler, not cool.) Plus, there’s not a bad seat in the house.

Hawk watchers at Hazel Bazemore in 2007 counted close to 650,000 raptors, including more than half a ­million Broad-winged Hawks. The eight species marked with asterisks below were found in record-high numbers.

Without doubt, the peak flight of the Broad-winged Hawk, the most numerous of migrating North American raptors, is what draws most hawk enthusiasts to Hazel Bazemore. In the last eight days of September (September 23-30), the average Broad-wing count exceeds half a million individuals, 70 percent of the season’s total, and single-day counts of more than 100,000 are not uncommon one to three times each fall.

A sky filled with migrating hawks is truly one of the most spectacular sights in all of nature. In 2004, a single-day count of 520,267 led the way to the one million mark for the season for the first (and only) time and put us in the company of only a handful of sites worldwide to have reached this milestone.

A Celebration of Flight, a free public festival featuring live raptor programs and talks by experts, is held every year during the peak passage period. The true stars, however, are the raptors themselves.

Just remember that the actual peak day or days may vary from year to year. Cape May Bird Observatory director and BirdWatching contributing editor Pete Dunne spoke at the inaugural celebration. On the first day, he was treated to a flight of 306,991 raptors, then a single-day U.S. record. It remains the only time I have seen Pete at a loss for words!

The next year, though, became known as the Celebration of Fright. Fewer than 3,000 individual birds were counted during the first three days — more people than hawks — and on the fourth day, a front arrived. We were rained out.

Of course, the next day, when few visitors were still around to see it, we counted 231,277 raptors.

My favorite time of year is the first three weeks of October. Cold fronts bring cooler weather and strong north winds, and the raptors just zoom by. It’s Sharpie… Sharpie… Coop and kestrel… kestrel… Peregrine! The action begins early and lasts all day.

A few hundred to several thousand Broadies can still be counted, but the tremendous diversity — as many 19 species in one day — is the attraction. Record single-day counts during this period include 39 Osprey, 60 Northern Harriers, 222 Sharp-shinned Hawks, 258 Cooper’s Hawks, 17 Red-shouldered Hawks, 8,756 Swainson’s Hawks, 184 American Kestrels, and 37 Peregrine Falcons. Although we didn’t set an overall single-day record, we tallied 55,066 Broad-winged Hawks, including 184 dark morphs, on October 9, 1998.

Every watch site that monitors migrating raptors is important. Some sites do a superior job in monitoring eagles, accipiters, or falcons, species that we do not count in significant numbers. Others have a much better idea of where their raptors are coming from, so they add to the overall knowledge of raptor numbers by area. Hazel Bazemore is ideal for monitoring two species: the Mississippi Kite and Swallow-tailed Kite. Their numbers peak from August into early September.
In 1997 and 1998, our counts of Swallow-tailed Kites were seven and six, respectively. By 2006 and 2007, the tallies had risen to 99 and 168. Similarly, our Mississippi Kite average has grown from between 3,000 and 5,000 to 14,073 in 2006 and 27,382 in 2007.

Questions raised by the increases were so intriguing that we started last year’s watch on August 1, two weeks earlier than usual, to see if we were missing a significant portion of early kite migration. And wouldn’t you know it? Two of my top-10 days on the watch occurred last season: on August 24, when a kettle of nine Swallow-tailed Kites riding up on a thermal soared overhead, and on August 31, when I saw 12,261 Mississippi Kites, more than I had ever seen in a single day. Our count beat every other total year except one.

The last week of October and the first two weeks of November bring thousands of vultures and the peak of Red-tailed Hawks. It’s also when your chances are best to see both species of eagles, Ferruginous and Rough-legged Hawks, and Northern Goshawk.

Other rarities can show up any time of the season. We have recorded both Common Black-Hawk and Hook-billed Kite only once. Each occurred in late September, during peak passage. Counters have tallied Aplomado Falcon six times (two falcons were spotted together last season), but the records have been spread out, as were our 11 sightings of Short-tailed Hawk. We counted Zone-tailed Hawks 37 times in the first 10 years, but last season’s total of 22, another product of starting the count two weeks early, was an unexpected surprise for everyone but John Economidy, who served as coordinator of the watch for HMANA for nine years. He predicted it before the season began.

White-tailed and Red-shouldered Hawks nest in or near the park and can be seen every day of the watch. A pair of White-tailed Hawks has nested successfully nine of the past ten years. Since our Red-shouldered Hawks are of the subspecies Buteo lineatus texanus, we refer to them as “Tex.” The adults and their offspring enliven the watch by alerting watchers to incoming raptors.

Crested Caracara and Harris’s Hawks are seen often throughout the season. Many other species are resident or become winter residents, including both vultures, Red-tailed, Sharp-shinned, and Cooper’s Hawks, Osprey, Northern Harrier, and American Kestrel.

Such birds only add to my already-long list of reasons for loving Hazel Bazemore — wonderful volunteers, generous supporters, new facilities, and hundreds of thousands of raptors. No wonder so many park visitors say, “Hazel rocks!”

Joel Simon is the watch coordinator and official observer at the Corpus Christi Hawk Watch at Hazel Bazemore Park as well as an author and frequent speaker about raptors. He has also worked as a tour leader, an eco-tourism consultant, a rep for a major optics company, and a field biologist. Originally Published October 1, 2008