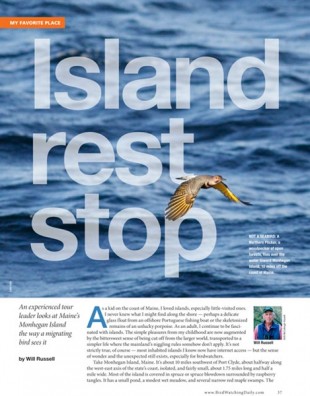 As a kid on the coast of Maine, I loved islands, especially little-visited ones. I never knew what I might find along the shore — perhaps a delicate glass float from an offshore Portuguese fishing boat or the skeletonized remains of an unlucky porpoise. As an adult, I continue to be fascinated with islands. The simple pleasures from my childhood are now augmented by the bittersweet sense of being cut off from the larger world, transported to a simpler life where the mainland’s niggling rules somehow don’t apply. It’s not strictly true, of course — most inhabited islands I know now have internet access — but the sense of wonder and the unexpected still exists, especially for birdwatchers.

Take Monhegan Island, Maine. It’s about 10 miles southwest of Port Clyde, about halfway along the west-east axis of the state’s coast, isolated, and fairly small, about 1.75 miles long and half a mile wide. Most of the island is covered in spruce or spruce blowdown surrounded by raspberry tangles. It has a small pond, a modest wet meadow, and several narrow red maple swamps. The village of Monhegan, population 75, occupies a small footprint on the southwest side. It might not be immediately apparent how such characteristics make the island a location for migratory birds par excellence, but as you’ll see, they do.

Let’s dissect its enviable reputation as a migration mecca. It’s offshore but not too far offshore, isolated but not too isolated, and small but not too small. View it as a migrating bird might, pushed away from land during the night by southwest winds in the spring or northwest winds in the fall: When it’s light enough to see, our bird knows it’s off course. Turning back to the northwest and to land, it finds a speck of green. Having flown all night and who knows how long during the first hours of daylight, our bird is ready to rest and feed, so it drops down on Monhegan’s southeast-facing coast.

If birds feel relief, I’m sure our bird would, just to fold its wings, but the spruce tangles on Monhegan’s southeast side don’t have enough resources to refuel. In fall, spruce trees are not a rich source of foods for birds without crossed bills, so our bird goes searching, and it finds food and water in the red maple swamps and in the deciduous plantings, fruiting shrubs, and well-watered tangles of the village.

So think about it: Hundreds of birds find themselves over the water at dawn and turn back to land. Seeing Monhegan, they then hunt for the relatively few bits and pieces of the island that can sustain them. It’s a double multiplier. And many of the birds are tired and hungry and more interested in capturing an inchworm than in the fact that you and your friends are peering at them from 20 feet away.

How to get there

Monhegan can be reached from three ports in Maine: Port Clyde, New Harbor, and Boothbay Harbor. Schedules vary by company and season. In summer, they run up to three times daily. Check here for details:

Several companies and non-profits offer guided birding tours to the island, generally in late May and late September. Check these sites for details:

In late May, you can expect to see lots of migrating songbirds — vireos, thrushes, orioles, phoebes, flycatchers, tanagers, and nearly all of the eastern warblers. Other highlights in spring include Merlin, Peregrine Falcon, Spotted and Solitary Sandpipers, and Black-bellied Plover.

Most of the same species fly through again in fall, especially in late September and early October, and they’re frequently joined by vagrants from the south, midwest, and west, including Dickcissel, Blue Grosbeak, Lark Bunting, Horned Lark, Clay-colored and Lark Sparrows, and Bobolink.

So lots of birds arrive and they’re not especially wary, but there’s more: Some birds have come from impossibly far away. They started off their migrations with an incorrect compass heading and ended up over the ocean having come from the west or the south or someplace distant. On the mainland, such birds vanish in the expanse of forest, but on Monhegan, with its multiple multipliers, they seem supernaturally frequent.

It can be almost inconvenient, sitting on a lovely porch in the late afternoon, overlooking town and the harbor, munching on a good Gouda and sipping a 12-year-old whiskey, when someone rushes up to say a Say’s Phoebe, a western flycatcher, is in front of the Carina Grocery and Deli. All of Maine may have only eight records of Say’s Phoebe. Something like that seems to happen every few days during migration’s peak.

While Monhegan is preeminently a migration place — and migration ebbs and flows — there’s always something to see: a passage of falcons, flocks of Northern Gannets diving over herring, minke whales under the tall cliffs on the southeast side, or flocks of Common Eiders feeding on blue mussels. Over dozens of visits, I’ve never come close to being bored.

Now, I’ll watch birds in rubbish dumps, sewage outflows, or wherever they concentrate, but I much prefer to watch them in beautiful places, and Monhegan is a beautiful place. The central elements are the brooding spruce forest and rocky shoreline, some of it spectacular, and a village so charming it’s indecent, but I love the overall quiet of the island.

The few resident fishermen, innkeepers, and merchants own only a handful of vehicles, which produce a minimum of discordant sounds. At night the quiet is almost eerie: The lap of waves, the ring of a distant bell buoy, and the hum of the wind in the trees is the full orchestra. The steady sweep of the lighthouse beam keeps time.

Of course, the last but as yet unspoken wonder of Monhegan is its accessibility. Ferries serve the island from three mainland towns, and at least three distinctive inns and a number of seasonal house rentals are available. In late spring and fall, lots of birders are about, providing information and casual companionship, and you might come across David Sibley or the ghost of Roger Tory Peterson watching a Philadelphia Vireo eating viburnum fruit.

Read Seabirds by Sail, editor Chuck Hagner’s 2014 article about birding the Gulf of Maine on a historic schooner.

Updated April 22, 2016: We updated our links and added a link to Barry Van Dusen’s article.