Become a member and get exclusive access to articles, contests and more!
Start Your Free Trial
BirdWatching  •  Locations & Travel  •  Featured Destinations  •  Hotspots by the sea 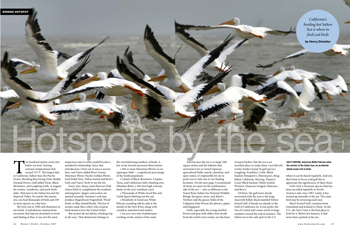 Two hundred twenty-seven feet below sea level. Searing summer temperatures that exceed 115° F. The largest lake in California. Saltier than the Pacific Ocean. Breeding Burrowing Owls, Ruddy Ground-Doves, Gull-billed Terns, Black Skimmers, and Laughing Gulls. A magnet for rarities, wanderers, and snow birds alike. Welcome to the Salton Sea and the Imperial Valley. No matter the season, you can find thousands of birds and 100 or more species in a day here.

My first visit in 1990 still shimmers in my mind. A malodorous summertime excursion that had me drenched in sweat and flailing at flies, it was not the most auspicious start to what would become a wonderful relationship. Since that introduction, I have yet to miss a season here, and I have added Ross’s Goose, Mountain Plover, Pacific Golden-Plover, Gull-billed Tern, Yellow-footed and Ross’s Gull, and Vaux’s Swift to my life list.

Every year, sharp-eyed observers find choice birds to complement the residents and migrants. Jaegers and scoters are spotted annually. Summer’s end may produce Magnificent Frigatebird, Wood Stork, or Blue-footed Booby. The list of rarities reads like a who’s who of great birds found across the United States.

But rarities do not define a birding trip to the area. That distinction belongs to the overwhelming numbers of birds. A few of my favorite personal observations:

• Hundreds of American White Pelicans standing side by side at the mouth of the New River, along with countless waterfowl and waders

And because the sea is so large (380 square miles) and the habitats that surround it are so varied (riparian, agricultural fields, marsh, shoreline, and open water), it’s impossible for me to point you to only one or two birding locations. Later, I recommend 20 must-see spots on the southeastern side of the sea — sites as different as the Sonny Bono Salton Sea National Wildlife Refuge (for geese, terns, and Abert’s Towhee) and the grassy fields of the Calipatria State Prison (for plovers, pipits, and longspurs).

Gulls, especially the young mottled brown and gray look-alikes that invade from the north every winter, are the bane of many birders. But the sea is an excellent place to study them. Last fall and winter, birders found 16 gull species: Laughing, Franklin’s, Little, Black-headed, Bonaparte’s, Heermann’s, Ring-billed, California, Herring, Thayer’s, Lesser Black-backed, Yellow-footed, Western, Glaucous-winged, Glaucous, and Ross’s.

Of these, the gull most closely associated with the area is the large, massively billed, black-mantled Yellow-footed Gull. It breeds on islands in the Gulf of California (or, if you prefer, the Sea of Cortez) and comes north in large numbers toward the end of summer. The Salton Sea is the only spot in the U.S. where it can be found regularly. And you don’t have to be an avid gull fan to appreciate the significance of these three:

Little Gull: a Eurasian species that has been recorded regularly in North America only since 1987. Lately, it has turned up annually at the sea. The same bird may be returning each year.

Black-headed Gull: common from Greenland and Iceland to China. In the U.S., the East Coast is the best place to look for it. Before last January, it had never been spotted at the sea.

Ross’s Gull: an Arctic bird that breeds on marshy tundra, mostly in the Russian Far East. It had never been seen in California until Friday, November 17, 2006.

A visitor from the north

That afternoon, my birding partner Bob Miller called me at work. “Henry, you’ve got to drive over to Red Hill Marina,” he blurted out. “Guy just found a Ross’s Gull!”

The marina is a popular spot to bird on the sea’s southeastern shore. And Bob wasn’t referring to just any guy. Guy McCaskie is the godfather of California birding. He helped create the California Bird Records Committee, and he was the first president of Western Field Ornithologists. He is also the co-author of Birds of the Salton Sea (University of California Press, 2003), the definitive reference for area birdwatchers. He is a master at finding rare birds. At least 20 species have been added to the state checklist because McCaskie or groups that he birded with found them.

I faced two dilemmas when I hung up the phone. The light would be fading soon, and Red Hill Marina was two hours west of me, so I could only hope that the gull would stick around until Saturday. However, I was due to attend the annual Arizona Rare Bird Committee (ABC) meeting the same day in Phoenix, three hours east of my home in Yuma and five hours east of the Ross’s Gull.

But just how often does an arctic bird fly to the desert? With some chagrin, I called fellow committee member Gary Rosenberg to tell him that I was going to let birding get in the way of business. Not to worry, though. Before the evening was half over, he had contacted the other ABC members, rescheduled the meeting for Sunday, and arranged for the entire ABC gang to go after the gull on Saturday.

Early the next morning, my wife and I set off in search of the bird. On the road into Red Hill Marina, I was distracted by the warm morning sunlight spotlighting a Peregrine Falcon perched on a telephone pole, no doubt watching birders race by on their way to a glorious target.

A few minutes later, we joined about 100 other smiling birders on the boat launch pointing hundreds of thousands of dollars’ worth of optics at a dainty, white, pink-washed gull walking, preening, and feeding in the shallows not 50 yards in front of us. As we entered the throng of happy oglers, we visited with old friends and marveled at the bird as it went about its business. My fellow ABC members soon arrived, equally pleased to find the bird just as cooperative for them. We could have held our annual meeting right there at a picnic table.

After we’d had our fill of the Ross’s Gull, we moved south to Obsidian Butte to sort through hordes of birds. A little later, we were birding the Salton Sea Levee, known to locals as the sea wall. McCaskie drove by and told us that four Roseate Spoonbills were on Bowles Road a few miles away. Spoonbills used to be spotted infrequently at the sea but had gone unreported for years.

We followed Guy to the south end of the sea, part of a 15-car procession rumbling over dirt roads. The spoonbills were present as advertised, feeding close to the vast, shallow mouth of the New River. The area was teeming with birds in every direction. Rafts of Northern Shovelers, Green-winged Teal, American Wigeons, and Northern Pintails mixed with hundreds of gleaming American White Pelicans, American Avocets, Black-necked Stilts, and a variety of waders. Joining the spoonbills were three of the original flock of flamingos that had escaped from captivity and showed up at the sea more than 20 years ago.

The Ross’s Gull broke a lot of hearts the next day. My friend Bruce Aird and his son Greg couldn’t make it down from Los Angeles until Sunday. When they arrived just before 7 a.m., they learned that the gull had been spotted flying east at first light. It was not seen again. At mid-morning, Bob Miller peeked in on the burgeoning crowd at the marina and reported that the mood of the group was not nearly as joyful as the day before.

Uncertain future for the Salton Sea

The Salton Sea was formed in 1905 when the Colorado River flowed into the Imperial Valley unimpeded for almost 18 months via a breach in an irrigation diversion. Now water flows into the sea from the New, Whitewater, and Alamo Rivers, much of which comes indirectly from the Colorado River as agricultural runoff. A 2003 agreement signed between the Imperial Irrigation District and the San Diego County Water Authority will have an enormous impact on the sea. By 2017, approximately 20 percent of the water that currently irrigates crops in the Imperial Valley will be diverted to San Diego, dramatically reducing the amount of water that flows into the sea.

To mitigate the change, several private and government parties have examined options to save parts of the ecosystem. In March, the California Department of Water Resources announced a $7 billion proposal to restore and maintain portions of the Salton Sea as wildlife habitat. The plan calls for breaking the sea into a smaller, 34,000-acre shallow lake in the north and creating about 60,000 acres of saline ponds and marshes in the southern portion. The plan must still be approved by the state legislature and faces numerous political hurdles.

The U.S. Bureau of Reclamation has also studied restoration alternatives. Because of high costs and uncertainties, it recommends an adaptive approach to constructing and studying saline habitat complexes. And in May, the U.S. Senate approved $30 million in funding for Salton Sea restoration. Whatever happens, it’s safe to say that if you want to see the Salton Sea in all its grandeur, plan to visit soon.

Two months later, I went back to the sea in pursuit of two more vagrants: Little Gull and Black-headed Gull. Friends Al and Helga Borgardt and I searched first for the Black-headed Gull at Anthony’s Fish Farm on the north side of the Salton Sea. But we found only Bonaparte’s Gulls, a common wintering species. Later at the south end, we also dipped on the Little Gull. Such is birding.

The next weekend, Al and I decided to give it one more shot. After all, even if we didn’t see our targets, it was still a chance to go birding. Our first stop was along the sea wall for the Little Gull. Nothing little was stirring — only big gulls.

A few hours later, we drove north to the fish farm. But it held even fewer Bonaparte’s Gulls than the week before. Our targets seemed as elusive as the Seven Cities of Gold.

We next headed to the Whitewater River delta, an outstanding bird magnet only 15 minutes away. At the delta, we met up with birding buddies who were hunting for the same treasure we were. An immature Glaucous-winged Gull was the first nice find. Then in a large flock of Bonaparte’s Gulls, we spotted the Black-headed Gull. It was partially silhouetted against the setting sun. We quickly found a better angle and were able to get nice views of its red bill in our spotting scopes. Picking the rare bird out of hundreds of look-alikes against a ruby sunset was the crowning achievement of a superb season at the Salton Sea.

Late spring and summer
Breeding shorebirds, Caspian and Gull-billed Terns, and gulls. American Avocets and Black-necked Stilts lay eggs on islands in the ponds, bays, and back-waters, or on the dike roads. Wood Stork, Magnificent Frigatebird, and boobies are possible in June and July. Immature Brown Pelicans accompany the many adults, and the lucky birder will find pelagic birds hunting the salty water. By July, shorebirds arrive in large numbers, the earliest of the fall migrants.

Henry Detwiler is a bird guide with Southwest Birders, a former member of the Arizona Rare Bird Committee, and a photographer. 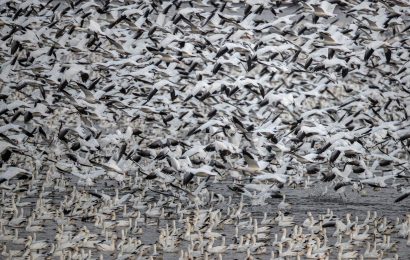