Ontario’s Presqu’ile Provincial Park, on the north shore of Lake Ontario, is a major stopover point for migrating birds, including waterfowl. In fact, thousands of birds of up to 20 species — Redheads, wigeon, scaup, others — can be seen on a typical day in March. 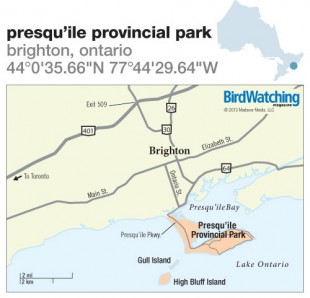 But this winter has hardly been typical. Frigid cold settled over the northern middle of the country, and ice locked up more than 92 percent of the Great Lakes. Ice stretched across 61.5 percent of Lake Ontario at its highest reading, the lake’s fourth highest amount.

We were curious about the effect of all that cold, and all that ice, on the park’s waterfowl, so we asked David Bree, senior natural heritage education leader at the park, for a report. David wrote about Presqu’ile in “Hotspots New You” in our June 2013 issue.

Read David’s report about Presqu’ile Provincial Park, Hotspot Near You No. 164.

He sent us the following update:

Working at Presqu’ile Park, I’ve had lots of people asking how the waterfowl migration is going this year. Usually mid-March is peak for this major staging area, but the cold winter has delayed the melting of the ice on the bay, and there are still ducks aplenty here into April this year. I try and get down into the park a couple of times a week so that I can give people an informed answer (one of my more enjoyable tasks). My “survey” on April 7 was quick but quite productive.

Driving down to the bay, I saw a number of American Robins and Dark-eyed Juncos flipping up from the newly exposed roadside vegetation. Both species are here all winter, but robins stay mostly hidden until spring, while juncos hang around feeders and will soon be moving out. Grackles, Red-winged Blackbirds, and Song Sparrows, all recent arrivals, were also present.

Presqu’ile Bay itself did not disappoint, with about 5,000 waterfowl of 15 species, mostly divers and dominated by scaup and Redhead. While the birds can often be quite close, a lot of ice was still near shore, and a scope was most useful for scanning the bulk of the birds. In addition to the main body of open water, a number of small opening and leads were in the rotting ice, and these were all full of birds, mostly Common Goldeneye and Long-tailed Ducks. Seeing a duck in an opening barely bigger than its body is always a source of amusement for me.

Also enjoyable to watch are the various courting moves the males make, with pride of place going to the neck-breaking display of the goldeneyes. While scanning the water, I was delighted to hear my first Golden-crowned Kinglet and Eastern Phoebe of the year coming from the bushes behind me.

I checked the bay from a couple of vantage points and got some closer looks at waterfowl and managed to pick up a couple of dabbling duck species in areas where shallow water had opened up. See below for my bird list for the 90 minutes I was out.

Not bad for a quick survey, but I did miss Northern Pintail and Red-breasted Merganser, which are usually around, and the more unusual Iceland Gull, which has been seen standing on the ice edge for the past week. Oh well, I’ll just have to see how things are progressing in a day or two — just in case people ask, you understand. — David Bree

Presqu’ile Provincial Park, Brighton, Ontario
Hotspot Near You No. 164
April 7, 2014