Smith Oaks is a treasure. It’s one of four sanctuaries maintained by Houston Audubon on High Island, Texas, and the place to be if you want to see large numbers of songbirds, hummingbirds, and other northbound Neotropical migrants that have just crossed the Gulf of Mexico each spring.

John Phillips Jr. (right) is a bird photographer who has made it his mission to photograph and showcase shore- and songbirds within a 100-mile radius of his home in Orange, east of Houston. In “Hotspots Near You” in our February 2013 issue, he reported that Claybottom Pond, within the sanctuary, is the site of another not-be-missed treasure: a rookery in which thousands of birds — Roseate Spoonbills, Great and Snowy Egrets, Tricolored Herons, and other waterbirds — nest each spring.

Read about Smith Oaks Bird Sanctuary, Hotspot Near You No. 153.

Read about the Rookery at Smith Oaks (Houston Audubon).

We asked John if he had returned to the hotspot recently. He sent us the following report:

Two weeks ago, reports out of the rookery were dismal. No large shorebirds were attempting to nest. Extended winter on the Gulf coast had possibly delayed their normal arrival this time of year.

Upon entering the lake and rookery, I was pleasantly surprised to see a large number of Great Egrets and Roseate Spoonbills that had apparently arrived over the last two weeks. Early estimates indicate that about 35-40 percent of the rookery was already filled up. 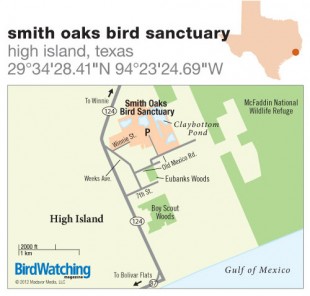 The northern end of the U-shaped island in the middle of the lake closest to the viewing decks has more birds than the southern end, so the best viewing or bird photography is on the fourth deck farther north.

The water in the lake is high, which is a good sign because in the past, as summer approaches, the canal between the island and the decks has nearly dried up. That could be devastating to the rookery, since it would permit animals on the mainland to invade the nests looking for eggs.

The best time to visit is from now until late May. If you come any later, the heat and mosquitoes will carry you away if unprotected.

The birds won’t leave until late June. Granted, Great Egrets, spoonbills, and cormorants are the first to nest. Next month, look for Cattle Egrets, Snowy Egrets, Little Blue Herons, Tricolored Herons, and some storks to follow.

Two portable restroom facilities are furnished, but no water and other amenities are located on the premises. The main gate is open, and the rookery is about 100 yards away from the main parking lot. There are four large decks to observe the birds up close — that is, from about 50-60 feet away. The birds are flying past constantly, gathering sticks for nests and dancing in the sky.

Everyday is a good time for birders to visit the rookery. For photographers, evening is best. That’s when the sun will be behind you, fully illuminating the birds in front.

Watching birds as they search for sticks and bring them back to build nests is one of the highlights of this wonderful setting. You will not be disappointed. And with a little planning, you can fill a whole day with birding while driving only a short distance.

Anahuac National Wildlife Reserve is only 15 miles away. Boy Scout Woods, another Houston Audubon sanctuary that’s great for observing migrating songbirds, is only two blocks away. For pelicans, if the tide is right, try Rollover Pass on the Bolivar Peninsula in Gilchrist, about 8 miles away toward Galveston. The flats on the north side also hold quite a few birds. Bolivar Flats, a Globally Important Bird Area and an International site in the Western Hemisphere Shorebird Reserve Network, is 20 miles away toward Galveston. And before you get to Boliver Flats, the jetty at the end of 17th Street may have foraging Reddish Egrets. — John Phillips Jr.

Totals are estimates. Numbers will skyrocket over the next two months.

Update: As of Monday, March 24, 2014, teams of state and federal biologists were checking eastern Galveston Island, Pelican Island, and the Bolivar Peninsula for birds and other wildlife that were oiled as a result of a spill that occurred in the Houston Ship Channel on Saturday, March 22.