Hatfield Lakes is a wastewater-treatment facility about nine miles east of Bend, in central Oregon, and one of the locations we named a Hotspot Near You. Damian Fagan, an Oregon-based freelance natural history writer and nature photographer, called it a magnet for migrating waterfowl and shorebirds in our February 2013 issue.

Almost 200 species have been reported at the facility — including Western, Least, Baird’s, and Pectoral Sandpipers; Long-billed Dowitcher; and Wilson’s and Red-necked Phalaropes — and even when the birding is slow, wrote Damian, “the view of the surrounding snow-capped Cascade Mountains is well worth the walk in.”

Read about Hatfield Lakes, Hotspot Near You No. 155.

We asked Damian if he had done any birding at the hotspot recently. He sent back the following report: 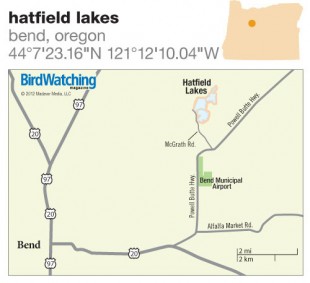 Recent storms and cold weather have left the Hatfield Lakes area snow-covered and the lakes mostly frozen. Access is still good via the paved McGrath Road, and the dikes have 1-3″ of snow on them. Winter weather has limited the available habitat; however, a good diversity of waterfowl exists. Gaiters, snow boots, or boots with ice-traction devices (YakTraks) are recommended.

Waterfowl are attracted to the open water, but passerines were nearly absent on this outing. Bald Eagles and Merlins continued to be observed hunting in the area, and recent reports of Northern Harrier and Red-tailed Hawk were recorded in the sightings book at the kiosk.

Even though conditions are wintery, the lakes have a lot of water, which will be good for waterfowl moving through the area as it warms up. — Damian Fagan

Damian Fagan is a freelance natural history writer and nature photographer who focuses on the flora and fauna of the American Southwest and the Pacific Northwest. You can see his work on the blog A Natural History Writer.

Learn about birdwatching spots in Canada’s most populous province.

Learn about great hotspots in the Quaker State.