In “Hotspots Near You” in our December 2012 issue, author and naturalist Anne Murray described a wonderful place in the Pacific Northwest: Drayton Harbor, in Blaine, Washington.

As Anne wrote, Drayton Harbor is a great place to look for birds, an Important Bird Area where thousands of Brant, Northern Pintail, and other waterfowl gather to feed, shelter, and socialize each winter.

We liked what she wrote so much that we asked her if she had returned recently, and if so, what she had seen. She sent us the following report: 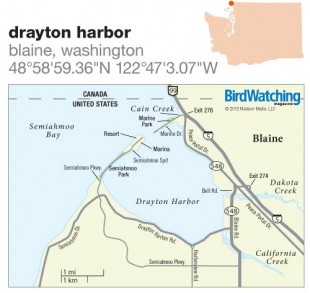 Drayton Harbor, Hotspot Near You No. 149, continues to live up to its “Hotspot” label, judging by the long species list our Casual Birders group notched up on a cold, clear morning early in January 2014.

We started in Delta, British Columbia. After crossing the international border at Peace Arch, we headed straight for Blaine fishing pier. This location gives excellent views of the deep waters of Boundary and Semiahmoo Bay, where loons, grebes and diving ducks like to hang out. It didn’t disappoint, as we soon spotted three loon species (Common, Pacific, and a Red-throated), along with Horned, Western, and Red-necked Grebes.

Pelagic and Double-crested Cormorants fished in the unexpectedly calm waters. A Belted Kingfisher was poised dockside, along with the usual Glaucous-winged Gulls waiting for scraps. Deepwater specialists — Long-tailed Ducks, Common Goldeneyes, Greater Scaup, scoters, and Pigeon Guillemots — were visible in the narrow passage of water at the mouth of Drayton Harbor. We got even closer views of many from Semiahmoo Spit later in the morning.

Driving in a convoy of carpooling cars, the group made its way back to an overlook of the inner harbour, where a Pied-billed Grebe scored us our fourth grebe of the day, and a mixed group of dabbling ducks increased our species count. A large roosting flock of Dunlin flew up from one of the breakwaters.

Moving on, we looped around the bay, arriving at the southern end of Semiahmoo Spit. There is a convenient parking spot here and walking trails along to the marina and resort. On the outer side of the spit, the open water stretching out through Boundary Bay is perfect habitat for diving ducks. Sure enough, a group of 40 or so Harlequin Ducks, Surf Scoter, and White-winged Scoter were feeding there, and we were excited to see a couple of pairs of Black Scoter among them. Flocks of Brant were flying in the distance.

Along the inner shore, we saw more cormorants, mergansers, Northern Pintails, and Green-winged Teal. A few Sanderling and Dunlin pottered around on the floating docks. Although good views of Canvasbacks and Ruddy Ducks are not uncommon here in winter, both species were far too distant today for anything but a telescope view. Having the birds spread out over relatively calm seas is a small downside to good weather.

We missed a lonely Mountain Bluebird that had been reported since the Christmas Bird Count, but I have reports it is still there this month (February 2014). Cold toes were beginning to affect many of us, so it was pleasant to warm up with coffee at the marina café before heading home. As usual, Drayton Harbor proved to be a haven for birds in winter.

Note: The Casual Birders are a birdwatching group from the Delta Naturalists’ Society, Delta, B.C., often accompanied by members of the White Rock and Surrey Naturalists and Nature Vancouver, and by occasional visitors.

The group is coordinated by Tom Bearss, who writes a humorous description of each trip illustrated with members’ awesome photographs for the Delta Naturalists’ Society blog. The groups’ trip to Drayton Harbor was on January 6, 2014. In the photo above, I am sitting in the front row of the group photo wearing a blue toque and a striped scarf. — Anne Murray

View all Hotspots Near You. Originally Published February 27, 2014