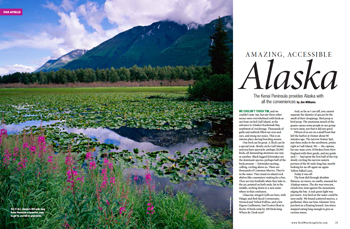 We couldn’t touch ’em, and we couldn’t taste ’em, but our three other senses were overwhelmed with birds as our boat circled Gull Island, at the entrance to Alaska’s Kachemak Bay, southwest of Anchorage. Thousands of gulls and seabirds filled our eyes and ears, and stung our noses. This is an intense place during breeding season.

One bird can be great. A flock can be a special treat. Slowly circle Gull Island, and you have spectacle: perhaps 20,000 birds, all demanding attention one way or another. Black-legged Kittiwakes are the dominant species, perhaps half of the birds present — kittiwakes nesting, calling, circling above us. There are thousands of Common Murres. They’re in the water. They stand on island rock shelves like commuters waiting for a bus. They are tiny footballs when they take to the air, pointed on both ends, fat in the middle, arching down to a nest somewhere in that confusion.

Glaucous-winged Gulls are here, with Pelagic and Red-faced Cormorants, Horned and Tufted Puffins, and a few Pigeon Guillemots. Surf Scoters float in flocks 10 birds wide by 200 birds long. Where do I look next?

And, as far as I can tell, you cannot separate the identity of species by the smell of their droppings. Bird poop is bird poop. The ammonia stench of the guano causes some people in our group to turn away, not that it did any good.

Fifteen of us are on a small boat that left the harbor at Homer about 90 minutes ago. The narrow Homer Spit, just three miles to the northwest, points right at Gull Island. We — the captain, his one-man crew, 10 birders from New England with their guide, and my guide and I — had spent the first half of the trip slowly circling the narrow eastern portion of the 40-mile-long bay, mostly looking for an off-again on-again Yellow-billed Loon.

Today it was off.

The boat slid through absolute flatness, no waves, no swells, unusual for Alaskan waters. The sky was overcast, clouds low, mist against the mountains edging the bay. A teal-green light was pervasive. Any bird on the water could be seen easily. We found scattered murres, a guillemot, then our lone Aleutian Tern, perched on a floating branch. Sea otters stopped eating long enough to give us curious stares.

The shorebirds of Kachemak Bay

At least 100,000 shorebirds rely on Kachemak Bay each spring, enough to earn it a designation from the Western Hemisphere Shorebird Reserve Network (WHSRN) as a site of international importance.

Two areas within the bay are particularly valuable: Mud Bay and Mariner Park, both at the base of Homer Spit, and the Fox River Flats Critical Habitat Area, at the head of Kachemak Bay. Expansive intertidal mudflats serve migrating shorebirds at both locations, while low-lying marshlands attract waterfowl to the Fox River.

The most numerous shorebird in spring is Western Sandpiper, but Dunlin, Surfbird, and dowitchers are also prominent. About five percent of the global population of Rock Sandpiper can be found on narrow, crowded Homer Spit in winter.

Gull Island is one stop on a 65-location trail, the Kenai Peninsula Wildlife Viewing Trail. You’ll most likely see moose and caribou here, mountain goats or Dall sheep if either your eyes or your luck is good, and a brown (grizzly) bear if you watch carefully or don’t. And fish: We made the tour during early July, salmon season. Salmon are king at this time of year, pun intended. On salt water, expect killer and humpback whales, porpoises, sea lions, and seals.

But mostly the trail is about birds. The fine trail guide published by the Alaska Department of Fish and Game lists 256 bird species, ranging in availability, as usual, from common to accidental. Included are 26 species of gulls, terns, and jaegers and 12 species of auks, puffins, and murres.

A highlight of the boat trip out of Homer was Marbled and Kittlitz’s Murrelets, in breeding plumage. Both species are declining. The Washington-Oregon-California population of Marbled was listed as Threatened under the Endangered Species Act in 1992. The U.S. Fish and Wildlife Service named Kittlitz’s a candidate for protection under the act in 2004 but denied the petition in 2013.

The wildlife-viewing trail begins at Potter Marsh (Hotspot Near You No. 108), a 10-minute drive from the Anchorage airport. You can follow the trail to Seward, to Kenai and Soldotna, and down to Homer and Seldovia. There are mountains, meadows, marshes, lakes, rivers, and salt water.

My guide and I spent several hours now and again along the Kenai River where salmon boats come to unload their catch. Processing plants line the shore. The parts of the fish that don’t arrive at your local market are ground to slurry and pumped into the river. Across the river, conveniently, about 30,000 gulls nest — Mew Gulls, Herring Gulls, and Glaucous-winged Gulls, plus some hybrids of the latter two species. A small Arctic Tern colony is there as well. All of the birds take commuter flights across the river to feed on the slurry. Almost always a cloud and clot of gulls is on the river.

This is where we first saw the jaeger. It was 500 yards off, but easy to see with binoculars once you found the wheeling dark bird among the white gulls. It drew black circles over the river water, gray-green with glacial flour, the talc-fine stone particles that cloud so many streams here. The jaeger, a Parasitic, worked the gulls for several minutes, my guide and I urging it to fly our way. It didn’t. So we moved 300 yards up river, for a better view. You know what the jaeger did: It immediately bee-lined for the slurry crowd, flying maybe 20 feet from our previous post.

Jim Williams’s trip to the Kenai Peninsula was as simple as it was productive. He consulted the excellent Kenai Wildlife Viewing Trail Guide, made arrangements through the Kenai Peninsula Tourism and Marketing Council, flew to Anchorage, rented a car at the airport, and went birding. The council website offers sample itineraries as well as information about guides, lodging, fishing charters, destinations, and events.

The council is a sponsor of the annual Kenai Birding Festival. The 2016 event is scheduled to take place in Soldotna, Kenai, Sterling, Kasilof, and Cooper Landing May 12-15. Lynn Barber, author of Extreme Birder: One Woman’s Big Year, will be the featured speaker.

Spruce Grouse were much more cooperative. Over six days of travel, we encountered four grouse families, hen and chicks. Like the murrelets, they accepted us with tentative toleration, certainly enough for photographs suitable for your website.

On the day I flew out of Anchorage for home, I had two extra hours built into my drive. I left the Sterling Highway (Alaska 1) for the 16-mile drive to Hope, a handful of buildings and a couple of signs on the south shore of Turnagain Arm, south of Anchorage. There you can take the Palmer Creek Road or Resurrection Road up into the mountains. This is where I will go first on my next visit.

The narrow gravel roads are wrapped in spruce and hemlock as they climb. White-winged Crossbills twittered from tree to tree. Juncos and Pine Siskins and Hermit Thrushes flushed from the road edges. Both Golden-crowned Sparrows and Wilson’s Warblers are up here. American Pipits are found in the tundra meadows. And all three species of ptarmigan — Willow, Rock, and White-tailed — have been seen here. Rock are said to be the easiest to find.

The Kenai Peninsula is 200 miles long and 100 miles wide. For a birder trying to see it all, it can seem as big as Alaska itself. Consider it Alaska with all the conveniences: paved roads, motels, restaurants, and souvenir t-shirts, if you want them. But mostly, consider it Alaska with very accessible birds.

Jim Williams writes a column about birdwatching for the Minneapolis Star Tribune newspaper. He is a former associate editor for Birding magazine. He described birding at Alaska’s Yukon Delta National Wildlife Refuge in our April 2008 issue, and he wrote about Minnesota Valley National Wildlife Refuge, Bloomington, Minnesota, Hotspot Near You No. 21. 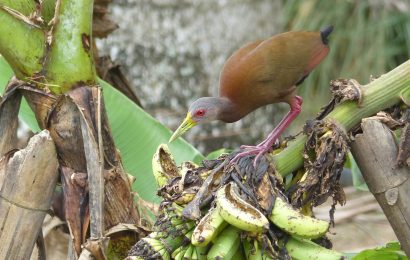 A birder and artist lives alongside an extraordinary mix of birds, including a rarely observed rail with a taste for fruit.

A guide to birding locations in northern, central, and southern Spain.