Become a member and get exclusive access to articles, contests and more!
Start Your Free Trial
BirdWatching  •  Gear & Products  •  Spotting Scopes  •  What you need to know about tripods 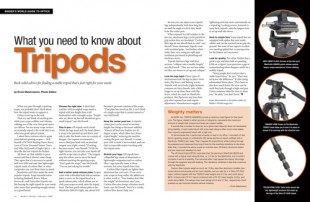 When you peer through a spotting scope, you probably don’t think about how the tripod works to support it.

Unless it isn’t up to the task.

Then try and think of anything else while your scope wobbles and vibrates, robbing you of the view that good optics can deliver. For too many scope owners, an unsteady tripod is the weak link in an otherwise good optical system.

All three say that stability is paramount and that it doesn’t come cheap. They agree that it’s necessary to spend well over $200 and note that lightweight tripods made of carbon fiber or other composites can cost three times as much.

Manfrotto and Gitzo make the most popular tripods. Scope manufacturers including Bushnell, Kowa, Nikon, Swarovski, and Zeiss offer tripods, too. But buying the right tripod for your needs takes more than spending enough money on a good brand.

Choose the right size: A short birdwatcher with an angled scope needs a tripod with less height than a tall bird­watcher with a straight scope. “People who are above six feet tall should not get a small tripod,” says McDowell.

Plan to pan: All tripods need a head. While the legs stand still, the head allows a scope to be pointed up and down and side to side. But heads come in a variety of designs. Our experts recommend a micro-fluid pan head with an attached tangent arm. “Tracking becomes easier,” says Russell. “With the right tension, you can take your hands off and the scope stays in place.” The tangent arm also allows you to move the head without touching the spotting scope. “Don’t grab the scope,” says McDowell. “You are just asking for trouble.”

Keep the center post low: A tripod’s center post can be raised to increase height, but doing so decreases stability. “Almost all bird-tour leaders use 45-degree scopes, which allow for a lower tripod height,” reducing the need for raising the post, says Russell. A center post with a crank is best avoided, and one that is removable makes traveling with the tripod easier.

Stretch your legs: All tripods have collapsible legs made of aluminum or lightweight composites such as carbon fiber. Legs typically come in three sections, but some tripods have four.

Carbon-fiber tripods are lighter than aluminum but cost more. If you carry your scope on long walks, the added cost is often worth it. “Tour leaders don’t like the weight” of aluminum, says Lyon. Carbon fiber also damps vibration much faster, says McDowell, “but if it is windy, carbon fiber doesn’t help you.”

Be sure you can adjust your tripod’s legs independently, both how long they are and the angle at which they stand from the center post.

When exposed to cold weather or the hot sun, aluminum legs can be painful to grip unless they are insulated. “Carbon-fiber legs do not absorb heat or cold,” says Russell. Some aluminum tripods come with insulated grips. And birders often make their own, using pre-split pipe insulation purchased at plumbing and hardware stores.

Tripods that have legs with four sections “collapse into a smaller length,” says McDowell. “They are not less stable, but they are slower to set up and collapse.”

Lock the legs tight: Three types of mechanisms lock the legs in place: twist locks, flip levers, and locking screws. Tripods with twist locks, common on Gitzo brands, take a little longer to set up than those with flip levers, which are used on Manfrotto products. But flip levers may lose their grip after repeated use and require adjustment. Manufacturers supply a tightening tool that stows conveniently on a tripod leg. Locking screws, featured in some basic tripods, take the longest time to set up and take down.

Stick to simple feet: Some tripod feet are equipped with spikes that nest inside rubber and can be screwed out to grip the ground. But none of our experts recalled ever needing spiked feet, so paying extra for the feature isn’t necessary.

Look for quality: Too often, birders buy a good scope and then balk at spending $300 on a tripod. Lyon perceives a gap in understanding when shoppers settle for a wobbly tripod.

“Many people don’t realize what a stable tripod does,” he says. “They may not know the difference.” It’s like using substandard binoculars. “They have no idea how much better the view can be until they look through a high-end pair. Unless someone takes the time to show you,” he adds, “you don’t learn.”

ALMOST ALL TRIPOD MAKERS provide a maximum load figure for their products. The figure, stated in either pounds or kilograms, represents the maximum amount of weight that a tripod and head can support safely.

It sounds like a number to shop by, but a given load capacity does not necessarily bring stability. A well-made tripod with a low load rating is often much more stable than a poorly engineered tripod with a high one.

To demonstrate this, I performed a hands-on test in my office. I mounted a 3-lbs. 65mm spotting scope on a Manfrotto 055 series aluminum tripod outfitted with a Manfrotto 700RC2 pan head. Then I tapped the tripod firmly while looking through the eyepiece and measured how long it took for the resulting vibrations to die down. After that, I mounted the same scope on a similar-size, off-brand, aluminum tripod and pan head and repeated my test.

The off-brand tripod ($150) costs less than the aluminum Manfrotto ($220) and comes with a higher load rating (8.8 lbs. vs. 5.5 lbs for the Manfrotto), but it couldn’t compare in terms of stability. Five seconds after I had tapped the tripod, the image through the eyepiece was still shaking. The vibrations vanished in less than a second with the Manfrotto.

Carbon-fiber tripods weigh as much as 1.9 lbs. less than aluminum models mentioned above and provide just as much stability, but you pay for it. A Gitzo GT-2540 (right, bottom) topped with the 700RC2 head weighs only 4.2 lbs. and costs about $675. A Swa­rov­ski CT-101 tripod combined with a FH-101 head weighs 4.9 lbs. and costs about $640. The setups have load ratings of 5.5 and 7.7 lbs., respectively. Each quieted my tap-induced vibration almost instantly.
– Ernie Mastroianni