Become a member and get exclusive access to articles, contests and more!
Start Your Free Trial
BirdWatching  •  Gear & Products  •  Books  •  Dictionary offers a who’s who of people who lent names to birds

Anyone who has been a birdwatcher for more than an hour has come across a bird name that refers to a person, either in the common name or in the Latinized scientific nomenclature. Such names are known as eponyms. 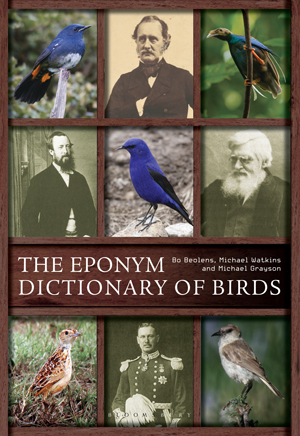 Who hasn’t wondered who these people were, or are? Thanks to this extraordinary dictionary, we can find out. On 624 pages, it describes more than 4,100 eponymous names covering 10,000 genera, species, and subspecies of birds. Every taxon with an eponymous vernacular or scientific name is listed, followed by a concise biography of the person concerned. Famous and not-so-famous ornithologists are listed, as are naturalists, collectors, royals, soldiers, and others.

Two of the three co-authors, birders Bo Beolens and Michael Watkins, wrote the 2003 book Whose Bird? Common Bird Names and the People They Commemorate. The dictionary, they emphasize, is not a second edition of Whose Bird? but a much more expansive work. Indeed, the dictionary’s third co-author, Michael Grayson of London’s British Library, brought his expertise in vertebrate taxonomy and nomenclature to the project.

You can use the book simply as a reference, but take it from us: It’s difficult to put down. When we turned to the entry for Charles McKay, discoverer of McKay’s Bunting, for example, we quickly became immersed in the nearby, and fascinating, descriptions of Richard C. McGregor, namesake of McGregor’s Cuckooshrike, and Professor Joshua Hall McIlvaine, a preacher for whom a subspecies of Forest Elaenia is named.