Become a member and get exclusive access to articles, contests and more!
Start Your Free Trial
BirdWatching  •  Gear & Products  •  Books  •  ‘Subirdia’ tells why suburbs are good (and bad) for birds

National Public Radio played a sly joke on Facebook earlier this year. They unleashed a torrent of responses by posting an article with the provocative headline “Why doesn’t America read anymore?” Commenters felt compelled to defend their reading habits but, it turned out, hadn’t taken the time to read the article. If they had, they would have seen this: “Congratulations, genuine readers, and happy April Fools’ Day! We sometimes get the sense that some people are commenting on NPR stories that they haven’t actually read.” 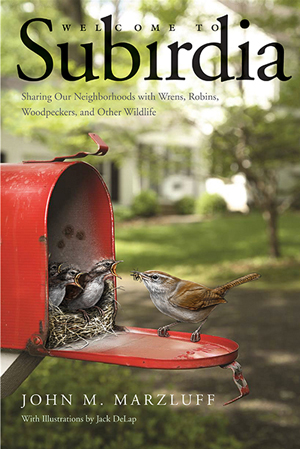 We know the feeling. And we suspect John M. Marzluff, a professor at the University of Washington and the author of many scientific papers and five good books, including In the Company of Crows and Ravens (2007) and Gifts of the Crow (2013), knows it too.

In Welcome to Subirdia, another good book, he describes a surprising discovery that he and his graduate students made in and around Seattle: They had expected avian diversity to increase as they moved from the city through the suburbs to wild areas on the outskirts, but the greatest diversity was not in the most forested setting; it was in the suburbs.

Which stands to figure, considering that as more and more natural area is converted into suburbs, birds will be squeezed into ever-smaller remnants, increasing local diversity. What’s more, many of our neighborhoods offer a variety of habitats. They’re filled with a diversity of plants and offer an assortment of foods. And all those habitats meet at typically bird-rich edges.

That urbanization also causes the decline, or disappearance, of certain species, and that it takes a toll on mammals, reptiles, and amphibians, is part of Marzluff’s story, too. Yet even before his book was published, word got out that he was promoting something he hadn’t written — that since suburbs were best for birds, we no longer needed to protect natural ecosystems. Which makes us wonder, Why doesn’t America read anymore?