We recommended 18 new books about birds in our June 2014 issue, including the six titles below. Each has won a spot on our bookshelf and deserves a spot on yours. 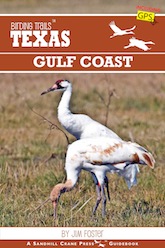 COASTAL HOTSPOTS: The ambitious Great Texas Coastal Birding Trail was the first completed by Texas Parks and Wildlife, and a huge success, followed by trails in the state’s four other regions. Birder Jim Foster described two (Panhandle Plains, and Prairies and Pineywoods) in an earlier volume in the Birding Trails Texas series. Here he provides descriptions, bird lists, best times to visit, and GPS coordinates and driving directions for no fewer than 261 coastal locations, from Louisiana to Mexico. 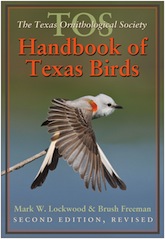 TEXAS BIRDS: In 2004, when this handbook first appeared, it described the status and distribution of 623 species accepted by the Texas Bird Records Committee. This handsome revised edition lists 639. It reflects the removal of two species, the replacement of Whip­-poor­-will, and the Canada/Cackling Goose split, and includes 17 exciting additions, including Double­ toothed Kite (spotted unexpectedly at High Island in May 2011, No. 637), Nutting’s Flycatcher (Big Bend, January 2012, No. 638), and Black­-tailed Godwit (Brazoria, June 2012, No. 639). 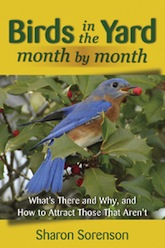 ATTRACTING BIRDS: After 45 years of working to attract birds to her three-­acre yard in south­western Indiana, Sharon Sorenson has learned a thing or two. Till now, she shared her expertise locally, in a biweekly column in the Evansville Sunday Courier. In Birds in the Yard Month by Month, we all get to learn. She teaches how to provide water, plants, and shelter, offers tidbits about bird biology and behavior, and argues for keeping yards wild, not neat. 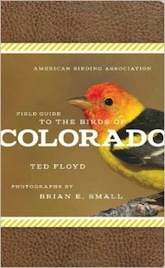 COLORADO AND NEW JERSEY: The birds of New Jersey and Colorado are the first to be featured in a new series of state-­based field guides from the American Birding Associa­tion and Scott and Nix Books. Each guide includes about half of the species recorded in the state: the most common and a few uncommon and scarce birds. One to three photos by BirdWatching contributing editor Brian Small and other top-­notch photographers illustrate each species, and cap­tions offer ID tips. Habitat associations or specific locations in the state where each species is found are described briefly, as are sounds to listen for. Future guides in the series will cover the birds of Florida, Massachusetts, California, New York, Arizona, Illinois, Pennsylvania, and Minnesota. 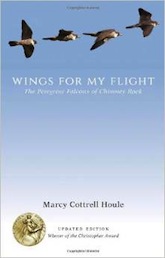 PEREGRINE FALCONS: In 1975, Marcy Houle was a 21­-year-­old wildlife biologist observing one of the last remaining pairs of Peregrine Falcon in the United States. In this absorbing book, first published in 1991, she tells the tale of her first field season watching falcons at Chimney Rock, an archeo­logically significant site in southwestern Colorado that was slated for development. This updated edition has a new preface about the recovery of the bird and President Obama’s recent designation of Chimney Rock as a national monument.

Versions of these reviews appeared in our June 2014 issue. Subscribe.

See all the new books about birds recommended in our June 2014 issue.