Become a member and get exclusive access to articles, contests and more!
Start Your Free Trial
BirdWatching  •  Gear & Products  •  Books  •  New on our bookshelf: Books about extinction, birding on both sides of the ocean, and the world’s birds

We don’t always have room in the magazine for all the titles that win places on our bookshelves. The three new books below are excellent examples. You don’t want to miss them. 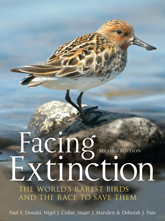 FACING EXTINCTION: The International Union for the Conservation of Nature’s Red List counts no fewer than 213 bird species as Critically Endangered. Conservationists are leading the fight to prevent the demise of these birds, and they’ve had a fair degree of success. This new book examines the process and issues concerning extinction — how and why it happens and what can be done about it. While humans are to blame for many of the causes, such as persecution and habitat loss, species have become extinct on a regular basis since life began.

After thought-provoking introductory chapters, the book showcases about 20 species on the brink of extinction from around the world, including the beautiful Brazilian Merganser, New Zealand’s flightless Kakapo, and the spectacular Philippine Eagle. Detailed, well-written accounts describe the work that is being undertaken to save them.

Grant McCreary of the website the Birder’s Library says Facing Extinction is the best book “that I’ve seen at explaining how and why birds become rare.” 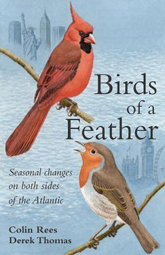 BIRDS OF A FEATHER: Writers Colin Rees and Derek Thomas are separated by an ocean but united in a passion for birds, wildlife conservation, and natural history.

Rees is chair of the Long-range Planning Committee of the Maryland Ornithological Society and a former president of the Anne Arundel Bird Club. He lives in Annapolis, Maryland. Thomas (@Coffeewarblers), the UK representative for the Smithsonian Institution’s Bird Friendly Coffee Program, recently retired as chairman of Wildlife Trusts Wales. He has also served with the Royal Society for the Protection of Birds, British Trust for Ornithology, and Royal Society of Wildlife Trusts. He lives surrounded by the sea on the Gower Peninsula in Wales.

In Birds of a Feather, the two friends portray the changing seasons in the UK and US, offering a month-by-month account of their separate but linked birding years. They take the reader on walks along bird-filled coasts and through grasslands, forests, marshes, and estuaries and describe the effects of changing weather on flora and fauna, the unfolding of the breeding season, bird counts, and the character of birders and bird organizations in the US and UK.

The result will leave you with a greater appreciation for the universality of both the changing seasons and the movements of birds, and a heightened admiration for all that unites birdwatchers the world over. 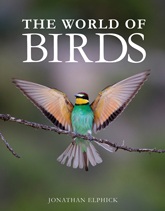 THE WORLD OF BIRDS: We love reference books that are big, authoritative, and beautifully illustrated. This one — written by ornithologist Jonathan Elphick, author of Birds: The Art of Ornithology (Rizzoli, 2005) and The Birdwatcher’s Handbook: A Guide to the Birds of Britain and Ireland (BBC Books, 2001) — is all three.

Elphick begins by defining the distinguishing features of birds and then describes their evolution since the age of the dinosaurs. (“As more information has come to light,” he writes, “it is clear that the distinction between birds and the non-avian dinosaurs from which they evolved is an arbitrary one.”)

In following chapters, he explores anatomy and physiology, flight, food and feeding, bird society and populations, breeding, where birds live, migration, and birds and humans. (“As we have caused the crisis of extinction currently afflicting birds and other wildlife,” Elphick rightly points out, “it is we who have the responsibility to deal with it.”)

His final chapter — a survey of the world’s birds — takes up the entire second half of the book. Reflecting the latest classification changes to the Howard and Moore Complete Checklist of the Birds of the World (Aves Press Ltd., 2014), it includes an introduction to the 32 orders and a detailed account of all 195 families — from tinamous to cardinals-grosbeaks. We’ll be dipping into this book often, and we’re looking forward to it.