The roster of North America’s birds has changed dramatically over the last decade or so.

Just think of all the exciting first records: Red-legged Thrush was found in Florida. Sinaloa Wren was recorded in Arizona. Rufous-necked Wood-Rail showed up at Bosque del Apache. Common Chiffchaff, Common Redstart, and other Asian strays made their debuts in Alaska. And White-crested Elaenia, Bare-throated Tiger-Heron, and Amazon Kingfisher were spotted in Texas. None had been recorded on the continent before. 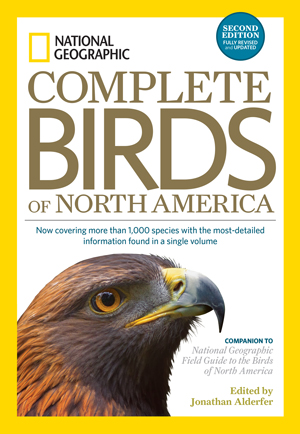 At the same time, falcons were shown to share an affinity to parrots, taxonomists moved tanagers from their own family into the family Cardinalidae, and the warbler genera Parula, Wilsonia, and Dendroica were done away with. Scientists also split Blue Grouse, Bean Goose, Greater Flamingo, Xantus’s Murrelet, Whip-poor-will, Winter Wren, and Sage Sparrow.

Birders looking for an authoritative, up-to-date volume that helps make sense of the new species and the new taxonomy will enjoy this one, the second edition of a reference work first published in 2005.

Written by field ornithologists and illustrated mostly with art and maps from the National Geographic Field Guide to the Birds of North America, sixth edition (2011), it provides field marks, vocalizations, geographic variation, status and distribution, and population size for every wild bird reliably recorded in North America before August 2013 — more than 1,000 species.

The updated description of one, Ivory-billed Woodpecker, promises to raise eyebrows. National Geographic’s editors, in their field guide, had already voiced skepticism about the 2004 rediscovery. (“Many question the evidence,” they wrote there.) Here they go a step further, expressing what they feel is the consensus of both the conservation and the ornithological community: “Several recent sightings and recordings made in the Big Woods of the White River–Cache River system of eastern AR in 2004 and 2005 were never confirmed and are now believed to be incorrect.”