Become a member and get exclusive access to articles, contests and more!
Start Your Free Trial
BirdWatching  •  Gear & Products  •  Books  •  In new book, a wounded war veteran finds his ‘reason for being’ in birds 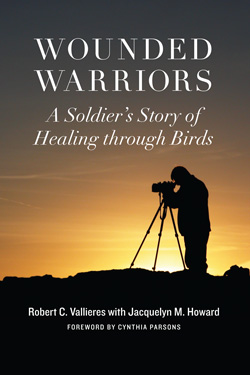 In 1990, while serving in the Persian Gulf War in Kuwait, an accident caused a traumatic brain injury and internal wounds. He was diagnosed with post-traumatic stress disorder and Gulf War syndrome. After a stay at Walter Reed Medical Center in Maryland, he returned home to New Hampshire but was unable to resume a normal life. Outwardly he appeared fine, but inside he was in constant pain. Thoughts of suicide were never far from the surface.

One day, Vallieres spotted a newspaper ad for a trip to see raptors in New Hampshire’s mountains. Feeling an “inexorable pull,” he signed up. Watching birds changed his life. It didn’t take away his pain, of course. But it gave him a purpose and a type of remedy no medical professional ever could.

In Wounded Warriors: A Soldier’s Story of Healing through Birds, Vallieres tells how birds helped him turn around his desperation.

“Birds found in me a place where no pills, therapies, or psychoanalysis could possibly go,” he writes. “All the advice the practitioners had given me was like a Band-Aid to dress a very deep and almost mortal wound and seemed to come from their perspective not mine. The birds simply walked into my heart and mind and, without judgment, perspective, criticism, or advice on what does and doesn’t work, or should or shouldn’t work, gave me back my life and reason for being; they instilled in me hope, beauty, and excitement at a new discovery.”

For the last 15 years, Vallieres has been a volunteer with New Hampshire Audubon, working with injured eagles and hawks and counting migrating hawks at the Carter Hill Raptor Observatory in Concord. For his efforts, he received the Spirit of New Hampshire Volunteer of the Year Award in 2009.

The book is not a traditional linear story. Vallieres presents field notes that he wrote while watching birds, especially Peregrine Falcons, and weaves in flashbacks to the accident and other experiences in the military. He tells about observing nesting falcons and suddenly losing 20 minutes to an apparent “pause in consciousness,” a maddening effect of his injuries that he describes as “a black hole, a wrinkle in my space-time continuum.”

Later chapters include Vallieres’s poems, odes to his son, and an essay from his co-author Jacquelyn Howard about a day she spent with him while he cared for an injured eagle.

In the foreword, Cynthia Parsons, a spokesperson for Warriors Speak, a division of the Wounded Warriors Project, describes how her son Shane, who was severely injured in Iraq in 2006, began to recover the instant he was introduced to a wounded Bald Eagle that is used in therapy for wounded vets. “That eagle healed Shane in ways no human possibly could,” she writes.

In fact, Vallieres and Howard are so sure of the healing nature of birds that they’ve developed “a blueprint for using birds in the therapy realm for all who are wounded and hurting, who do not know where to turn or what their next best step may be.”

This review originally appeared in our June 2014 issue. Subscribe.
See the other books we wrote about in the issue.