If only we had a nickel for every time we’ve seen a Bald Eagle on television and heard a Red-tailed Hawk’s call. You too? No matter how much we hope that the next-door neighbor understands what the hawk looks like and what the eagle sounds like, we know better.

That’s why we’re delighted by this new children’s book (ages 4-8), the second in a series written by Stacey Patterson and illustrated by Russia’s best-known wildlife artist, Vadim Gorbatov: 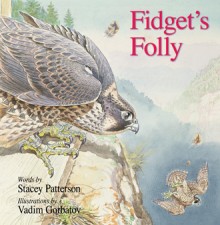 In the June 2013 of BirdWatching magazine, we described 18 new books about birds that belong in your library — and in the hands of your favorite young birder. This was the only work of fiction.

Like the equally charming Fidget’s Freedom (2006), Fidget’s Folly tells the story of two young Peregrine Falcons, Fidget and Echo, struggling to find their way in the wide, unknown world beyond their hack box. Gorbatov fills that world with steep red cliffs, ponderosa pines, bighorn sheep, and black bears, and populates the sky with flocks of supporting characters, unnamed by the author but easily recognizable, thanks to the illustrator, as Cliff Swallows, Mountain Bluebirds, a White-throated Swift, and Sandhill Cranes.

When migrating cranes pass high overhead, Fidget realizes the time has come for her to fly south, too. When she departs, on the book’s final page, every young reader will know the truth: that we live in a world of extraordinary natural wonder and beauty.

Look for a roundups of notable new books about birds in every June and every December issue of BirdWatching magazine.