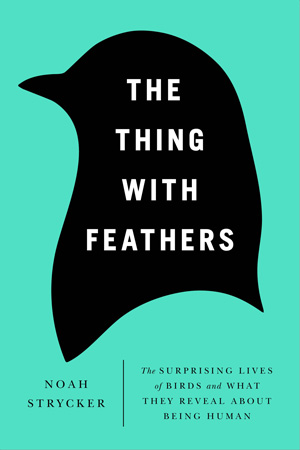 When Noah Strycker first wrote for this magazine a dozen years ago, he was 16, and we wondered, “Who is this kid? He writes better than most adults.”

Now no longer a child, Strycker is an even better writer and an accomplished birder. He is associate editor of Birding magazine, a seasonal field researcher who has studied birds in Panama, Australia, Fiji, Mexico, New Zealand, and other far-flung lands, and an author.

His first book, Among Penguins (University of Oregon Press, 2011), describes a summer spent studying Adélie Penguins in a field camp in Antarctica. His just-published second book, The Thing with Feathers, is one of the best bird books you’ll read this decade. Guaranteed.

Strycker helps us get to know a handful of species — Rock Pigeon, Turkey Vulture, Snowy Owl, European Starling, Wandering Albatross, and others — through his own observations and researchers’ latest findings on the birds’ intelligence and behaviors. We learn about the homing abilities of pigeons, nutcracker memory, bowerbird courtship, magpies that recognize themselves in mirrors, and the incredibly low divorce rate among albatrosses.

Strycker also turns his attention to humans, our technology, and its surprising importance in understanding birds. For instance, the 10-camera instant-replay system used at professional tennis tournaments to determine if shots are in or out is the same method researchers in Italy employed a few years ago to photograph starling flocks.

The bottom line: Birds are full of wonder. And we’re thankful to have Noah Strycker to tell us about them.

Read about other recommended books for birdwatchers.