Become a member and get exclusive access to articles, contests and more!
Start Your Free Trial
BirdWatching  •  Gear & Products  •  Books  •  In ‘Nextinction,’ gonzo artist illustrates birds that can still be saved 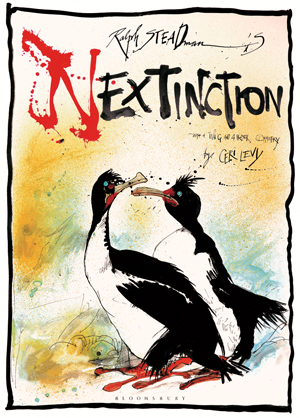 World-renowned illustrator Ralph Steadman was one of the scores of artists who contributed to the recent “Ghosts of Gone Birds” exhibitions in Great Britain. (We reviewed the book that accompanied the series in our December 2014 issue.)

Steadman is best known for illustrating American gonzo journalist Hunter S. Thompson’s books and magazine articles, including Fear and Loathing in Las Vegas and Fear and Loathing on the Campaign Trail ’72. Steadman also provided artwork for editions of Alice in Wonderland and other classic books, postage stamps, album covers, and beer and wine labels.

For “Ghosts,” he produced so many images of extinct birds, at the encouragement of documentary filmmaker Ceri Levy, that he and Levy compiled them into a book called Extinct Boids (Bloomsbury, 2012). It showed us Great Auk, Passenger Pigeon, and other real species like we’ve never seen them before, as well as imaginary “boids” like Gob Swallow and Long-legged Shortwing.

Now Steadman and Levy turn their talents toward introducing readers to birds that can still be saved. In Nextinction, they profile the 192 birds listed as Critically Endangered by the World Conservation Union — the species next in line for extinction — such as California Condor, Spoon-billed Sandpiper, and Kakapo. It’s a colorful take on a serious topic. And again, Steadman’s ink splotches reveal fanciful species, including Orange-beaked Thrush, which can outrun an Ostrich, and Spot-tailed Neck Back, a bird that can’t seem to get out of the way of moving vehicles.

“Everyone knows at least one extinct bird, usually the Dodo, but how many people can actually name a Critically Endangered species let alone understand what one is?” Levy asks. “Why do more people know of an extinct species rather than the plight of the Black Stilt?”

He says he and Steadman are “a couple of gonzovationists who are sticking up for the little guys.” To that end, a portion of the book’s proceeds will go to BirdLife International.

ABA adds books about California and Pennsylvania to its series of state birding guides.