If most of what you know about dinosaurs derives from the 1993 film Jurassic Park, then John Pickrell, the editor of Australian Geographic, has surprising news for you. “We have learnt more about dinosaurs in the two decades since Jurassic Park,” he writes, “than during the whole of history up to that point.” 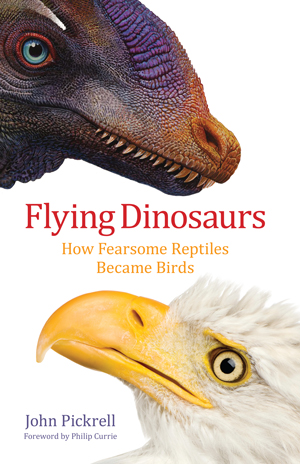 In Flying Dinosaurs, his fast-paced book, he aims to bring us up to speed.

He starts with Archaeopteryx, the first bird, and Deinonychus, unearthed in 1964, the fleet-footed, carnivorous, bird-like dinosaur that inspired Stephen Spielberg’s velociraptors. Then he moves quickly to more recent fossil discoveries, including Sinosauropteryx, the first of the feathered dinosaurs, described in 1996; Yutyrannus, announced in 2012, a bus-sized feathered relative of T. rex; and Anzu wyliei, described in 2014, the second feathered dinosaur ever discovered in the Americas.

Evidence for feathers now exists in about 40 species, Pickrell writes, allowing paleontologists not only to imagine a world populated with a “bizarre menagerie of bird-like dinosaurs” but also to shed light on how the development of flight helped the animals survive the cataclysm that, 66 million years ago, caused thousands of other dinosaur species to go extinct.

It all makes for a fascinating read. Just as interesting, though, is how the discoveries redefine what it means to be a bird. “It used to be easy to define a bird,” Pickrell writes: “birds had feathers and beaks, they flew, they were bipedal, they laid eggs, they were warm-blooded and quick-witted, and they had wishbones. The problem is that most of the 30 or so once-defining features have quite literally gone the way of the dinosaurs.”

This new guide about bird collisions with windows can help consumers prevent the deaths of more than 100 million birds each year.

Here are a few bird-themed items we like this holiday season.