The birders of Massachusetts know they have a treasure in Doug Chickering. For years, he has turned posting messages to Internet listservs into an art form. 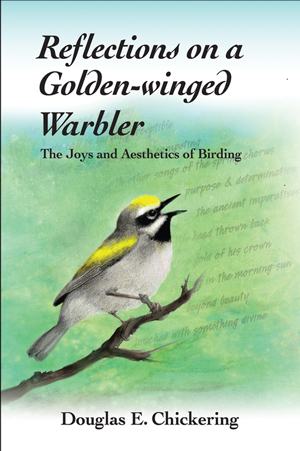 Chickering doesn’t simply list birds. He writes compelling, funny, and eminently readable essays about the birds he has seen and his experiences finding and watching them.

Local radio host Ray Brown has featured Chickering’s writing on his weekly show Talkin’ Birds, and Steve Grinley, owner of a birding retail store, occasionally quotes Chickering’s work in his weekly newspaper column “Words on Birds.” Now Chickering’s best essays have been gathered into Reflections on a Golden-winged Warbler. Most appeared between 2002 and 2013 as Massbird posts, and a few were first printed in Bird Observer, Winging It, and other publications.

Writing about birds and writing about birding are related, certainly, but they’re not the same. When Chickering writes about birds, he explains what he sees: Shearwaters flying alongside the boat during a pelagic trip, for example, “seemed to be feeling their way over the waves with the tips of their wings, occasionally touching the top of a small wave, never once losing their composure or disrupting their progress.”

When he writes about birding, he explains what he feels: the collective joy of seeing North America’s first Red-footed Falcon on Martha’s Vineyard, or the disappointment shared when a friend barely missed a Western Tanager on Cape Cod. Few writers capture the essence of being a birdwatcher as well as Chickering. Don’t miss his book.

Reflections on a Golden-winged Warbler: The Joys and Aesthetics of Birding, by Douglas E. Chickering, Bard Brook Press, 274 pages, paperback, $20