Become a member and get exclusive access to articles, contests and more!
Start Your Free Trial
BirdWatching  •  Gear & Products  •  Books  •  ‘Cat Wars’ is a well-written summary of a complicated problem

The controversy has been raging for years now between those who oppose the lethal control of outdoor cats and those who see such measures as an essential element in protecting biodiversity.

The data are clear that cats on the prowl, whether feral or owned, consume vast numbers of wildlife. The authors of this important new book cite a study that quantified the annual carnage in the United States: from 1.3 billion to 4 billion birds; 6.3 billion to 22.3 billion mammals; 95 million to 299 million amphibians; and 258 million to 822 million reptiles (Loss et al., 2013). 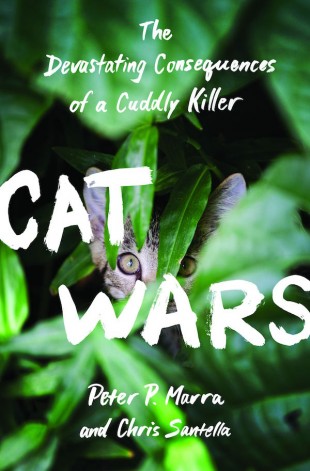 The impacts of cats on smaller landmasses can be particularly devastating. One study attributed 14 percent of all animal extinctions on islands to cat predation. On Stephens Island, off New Zealand, it appears that the island’s eponymous “wren” was obliterated through the efforts of Tibbles, the lighthouse keepers’ pet, and her progeny.

Denial of the numbers seems to be eroding, but many cat advocates still contest the need for lethal control. They have resorted, in large measure, to advocating trap-neuter-return, a program in which people provide food to cats, concentrating them, and then capture, neuter, and return the animals to the wild. The assertion is that, by receiving food and being rendered sterile, the treated cats will slowly disappear through natural mortality as they live out their lives free of the need to hunt. As Peter Marra and Chris Santella effectively document, however, the assertions are simply not so for two principal reasons: “caretakers fail to trap and neuter enough cats,” and “most colonies are constantly receiving new animals.”

The ecological issues involving the predatory nature of a carnivore like the domestic cat are pretty obvious. But Cat Wars also devotes attention to the various diseases that cats can host. The authors give two recent examples of human deaths caused by cat-borne pathogens: a man in Colorado who died of Yersinia pestis, the bacteria behind the various types of plague, and a girl who succumbed to rabies in New York. The health risk to humans is recognized by the National Association of State Public Health Veterinarians, which maintains that “stray dogs, cats, and ferrets should be removed from the community.”

The parasite Toxoplasma gondii can also thrive in cats and cause great harm to both humans and wildlife, particularly marine organisms. The authors attribute the spread of the parasite by cats as a serious impediment to the preservation of such rare species as Hawaiian Crow, Hawaiian monk seal, and sea otters.

Cat Wars covers not only the data corroborating the problems posed by loose cats but also the people involved in the story. Marra and Santella interview researchers and activists on both sides. The reader learns of efforts underway to bridge differences between factions, so the massive mortality caused by cats can be effectively reduced. This is a well-written summary of a complicated problem that deserves great attention. To ignore the facts and adopt ineffective measures will only hasten the impoverishment of our planet’s biodiversity.

Joel Greenberg was a founder and principal of Project Passenger Pigeon and is the author of A Feathered River Across the Sky: The Passenger Pigeon’s Flight to Extinction (Bloomsbury, 2014) and other books. In our February 2014 issue, he co-authored an article about the demise of the Passenger Pigeon.

Cat Wars: The Devastating Consequences of a Cuddly Killer

Canadian and U.S. studies agree: Cats are the most lethal threat to birds

This review was published in the February 2017 issue of BirdWatching. Subscribe.