The whole world knows that James Bond is 007, the fictional British spy. In real life, however, James Bond (1900-1989) was an ornithologist and an expert on the birds of the Caribbean. He wrote Birds of the West Indies, the definitive book on the subject. First published in 1936, it has been reprinted several times. 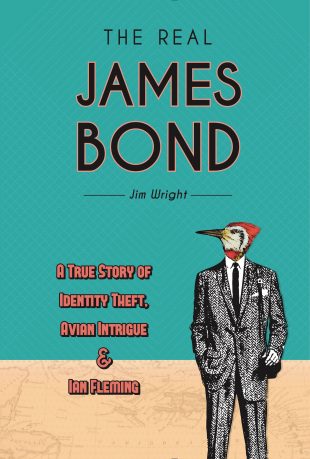 In the new biography, The Real James Bond: A True Story of Identity Theft, Avian Intrigue, and Ian Fleming, author Jim Wright tells the real Bond’s story, from his privileged yet tragic childhood to his early interest in birds to his travels throughout the West Indies. Readers also meet Ian Fleming, the novelist who appropriated Bond’s name for his iconic character.

Wright is an author, blogger, freelance writer and birding columnist for The Record in northern New Jersey. His previous books include The Nature of the Meadowlands, Hawk Mountain, and Jungle of the Maya. He also works as a marsh warden at the Celery Farm Natural Area in Allendale, New Jersey (Hotspot Near You No. 63).

We recently interviewed Wright about the book, Bond, Fleming, and their legacy. Please enjoy.

Congratulations on the book. It’s quite informative and a fun read. What inspired you to write it?

I’m from Philly, I love birds, and I love the 007 novels and movies. When I heard that Ian Fleming’s super-spy was named for a Philadelphia ornithologist, I had to learn more. I kept finding out more and more amazing information — about his troubled childhood, his adventures in the Caribbean, his landmark book Birds of the West Indies. I also kept discovering all sorts of wonderful color paintings and photos and ephemera that brought Bond’s story to life.

One thing led to another, and The Real James Bond is the result.

I was aware of the broad outlines of the story — that Ian Fleming took the name of an ornithologist who had written books about Caribbean birds to be his main character, but I didn’t know the details of Jim Bond’s life or how Fleming purloined Bond’s name. How did the real James Bond feel about his name being used?

Bond didn’t enjoy the 007 connection, although he did concede that it helped get him through customs on occasion. He became aware that Fleming had appropriated his name in the early 1960s, when Fleming’s thrillers became popular in the U.S. and breathless young females would call Bond’s home late at night and ask, “Is James there?”

His wife realized something was fishy, and she found a magazine interview with Fleming in which he ‘fessed up to the crime.

As 007 became more and more famous, the real Bond liked the connection less and less. Here he was, a famous ornithologist, taking a backseat to a hard-drinking, womanizing fictional spy.

Do we know if he read the books or saw any of the James Bond films?

The real Bond saw some of the books and was not a fan. As he told Fleming when they met at Goldeneye: “I don’t read your books. My wife reads them all, but I never do.”

Fleming replied: “I don’t blame you.”

I haven’t read any accounts of Jim Bond seeing any 007 movies, but I know he was offered $100 to attend a movie-theater premiere of “Goldfinger” — and arrive by helicopter. He refused.

What were some of the significant discoveries that Jim Bond made about birds?

Bond discovered the Bahama Nuthatch, the only member of that family found in the West Indies. It’s in such decline that it is feared extinct following recent hurricanes.

Bond also discovered the last Eskimo Curlew, shot by a hunter in Barbados in the mid-1960s. It was in the middle of the 007 craze, and headline writers went wild — “New Bond Thriller: Case of the Curlew” and “James Bond Nabs a Rare Old Bird” and dozens more.

More than any particular discovery, Bond’s contribution was Birds of the West Indies, which remained in print for most of the 20th century and introduced generations of birders to such splendid birds as the Bee Hummingbird (the smallest bird in the world), the Red-billed Streamertail, and the Cuban Tody.

I didn’t know that some of Bond’s contemporary ornithologists worked as spies during World War II. Do you know to what extent Fleming based his character James Bond on these ornithologists/spies?

I doubt that he based his character on these ornithologists/spies, but I do think that part of the reason he chose “James Bond” for his hero’s name was because “birdwatcher” was British espionage slang for spy — so a bit of an inside joke, perhaps.

What surprised you about the story as you were researching the book?

Plenty — enough to fill a book. I was surprised about how rich Jim Bond was as a child (and educated in England!). I was amazed how he explored the Caribbean on a shoestring. And I had no idea what a lasting impact he has had on birding and pop culture.

Bond was also an advocate for conservation in the West Indies — which is why I am donating the proceeds from my talks about the book to The Nature Conservancy’s Caribbean initiative in his honor.

Mary Bond has a much bigger following than I realized, and the more I hear about her, the more I want to write about her. She was an amazing personality who wrote in detail about the usually reticent Bond’s early expeditions to the Caribbean.

I also didn’t know that Ian Fleming was such a birdwatcher. He owned at least two copies of Birds of the West Indies, and he wrote lovingly about birds — when an arch-villain wasn’t shooting them.

What kind of reaction have you had to the book?

Lots of great reactions from both birders and Bonders, who are learning more about one another’s passions. That sort of cross-pollination was a goal of mine, so it’s quite gratifying.

I also enjoy how people seem attracted to a wide range of chapters — from Bond’s childhood in Philly, to his many adventures, to all those Bond contemporaries who were spies in real life.

I bumped into a woman who worked with Jim Bond at the Academy of Natural Sciences toward the end of his life. She said he introduced himself as “the real James Bond.”

Learn more about The Real James Bond on Amazon!