In the June 2013 of BirdWatching magazine, we described 19 new books about birds that belong in your library — and in the hands of your favorite young birder. Here is what we wrote about Imperial Dreams, Tim Gallagher’s recent book about Mexico’s Imperial Woodpecker: 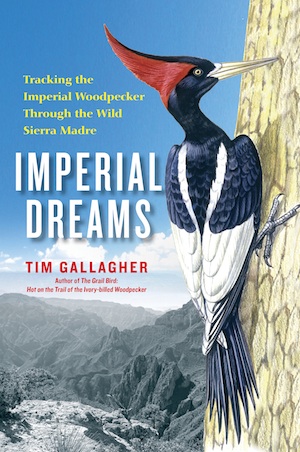 Tim Gallagher, editor of Living Bird, was a key member of the team that searched for the Ivory-billed Woodpecker in the mid-2000s. In this book, he tells of a more recent, equally valiant quest: to find an Imperial Woodpecker, the Ivory-bill’s larger Mexican cousin.

During several treks to the Sierra Madre, he talks to anyone he can about the pitoreal and, at great personal risk, searches the mountains in hopes of seeing it. He uncovers recent, credible, previously unreported sightings by locals but does not find a woodpecker. An interview with an elderly man in a remote village, however, produces a shocking discovery: Years ago, logging companies provided poison and paid bounties to locals who brought in dead pitoreales. Poisoning likely led to the sudden demise of the bird in the 1950s and ’60s, Gallagher suggests.

The bird’s tragic fate, of course, pales in light of the long-running brutal drug war that has claimed thousands of lives in the region. To his credit, Gallagher does not shy away from describing the violence. The stark reality is that if the bird were to be rediscovered, protecting it would be next to impossible as long as lawlessness rules the land.

Look for roundups of notable new books about birds in every June and December issue of BirdWatching magazine.

From our August 2005 issue: Eyewitness accounts of Ivory-billed Woodpeckers from the Cache River, Arkansas

From our December 2005 issue: Description, range, habits, and credible sightings of the Imperial Woodpecker