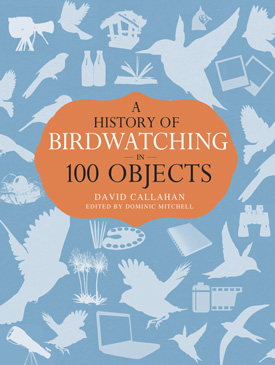 In 2010, Neil MacGregor, director of the British Museum, teamed up with the BBC on a radio series called A History of the World in 100 Objects. It presented items of ancient art, industry, technology, and arms from the museum and described their importance in human history. MacGregor soon produced a book of the same title that showed photos of the 100 objects alongside the text from his broadcasts. The idea caught on with publishers, and today we have histories of Ireland, the two World Wars, and the Beatles, among others, all told through the stories of 100 important objects.

Now David Callahan and Dominic Mitchell, staff members of Britain’s Birdwatch magazine, have followed MacGregor’s template with A History of Birdwatching in 100 Objects. It’s due out on August 5. “This book,” says Callahan, “aims to chronologically compile the essential innovations that have built the hobby into the gadget-heavy popular pastime we know today.” In fact, more than one-third of Callahan and Mitchell’s list is devoted to gadgets: the first microphone, the parabolic reflector, the porro-prism binocular (below), Nikon’s Coolpix camera, Apple’s iPhone, and many others.

Readers are also treated to an engaging and thoughtful mix of bird art, publications, and specimens that proved critical to birding’s history. Object No. 1 is the world’s oldest known rock art: a 45,000-year-old depiction in red ochre of two Emu-like ratites discovered in northern Australia. Egyptian bird art follows, as well as a bust of Aristotle, “the first known writer to undertake what we would recognize as a systematic study of birds.”

More than 20 publications are on the list, including the 10th edition of Linnaeus’s Systema Naturae, the source for the modern classification of birds, and the first issue of The Ibis, the world’s first ornithological journal. A first edition (1934) of the Peterson field guide is here, as is a 1967 book by British birder John Gooders, Where to Watch Birds. A “comprehensive new-format directory of Britain’s best birdwatching sites,” it would inspire a legion of bird-finding guides about locations around the world.

The authors also feature a handful of specimens and other items that have played an important role in the history of bird study. In 1861, just two years after Darwin published his theory of natural selection, the first Archaeopteryx fossil was unearthed in Germany, marking a tangible connection between theropod dinosaurs and modern birds. A stuffed Dodo from a prestigious London museum is said to be a poor representation of what the bird actually looked like. It reminds us that man can wipe out a species and rewrite its history with mythology.

The book has a decidedly British slant, so instead of bird feeders and banding, we read about bird tables and ringing. No matter. The authors are careful to point out innovations from North America or other regions when appropriate. Plus, we American and Canadian readers get to meet Nancy Gull, who owned an eatery near the Cley marshes, one of Britain’s top hotspots. In the 1970s and ’80s, Nancy’s Café was the place for birders to meet and share sightings, and its phone, frequently answered by birding customers, became the country’s first birdwatching hotline. Carefully selected and well-described gems like this make Callahan and Mitchell’s History a pleasure to read. — Matt Mendenhall, Managing Editor

A History of Birdwatching in 100 Objects by David Callahan and Dominic Mitchell, Bloomsbury USA, 2014, 224 pages, $35, hardcover.

See all the new books about birds recommended in our June 2014 issue.