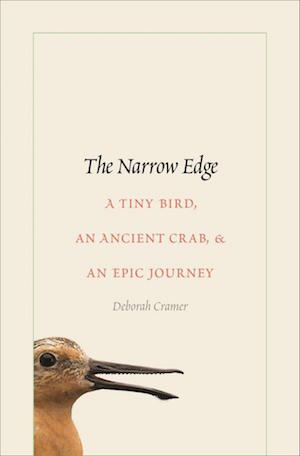 Who knows how many newspaper and magazine articles, including several in our pages and on our blog, have described the steep decline of the Red Knot and its recent listing as threatened under the Endangered Species Act.

What we needed was a thorough, up-to-date examination of the bird’s plight. Deborah Cramer, the author of two critically acclaimed books about the ocean and a visiting scholar at MIT, provides just that in The Narrow Edge. She went in search of knots throughout their vast range, traveling more than 40,000 miles in all to Tierra del Fuego in southern South America, along the beaches of Texas, South Carolina, and New Jersey, and to their arctic nesting areas on Southampton Island in northern Hudson Bay.

Cramer accompanied ornithologists, some of whom have studied knots and tracked their dwindling populations for decades. In Argentina, she flew in a helicopter with Guy Morrison of the Canadian Wildlife Service, one of the world’s foremost experts on the species. (His daughter, Clare Morrison, wrote about his research and the shorebird in a feature article in our April 2011 issue.)

It has been well documented that knot numbers have diminished because horseshoe crabs are also in trouble. The animals lay their tiny eggs on Atlantic beaches, nourishing scores of migrant shorebirds.

Cramer dives deep into the story, riding with a fisherman who collects spawning crabs and visiting a lab where their blue blood is extracted. It is used to detect life-threatening contaminations of vaccines, medicines, and syringes, stents, pacemakers, and other medical devices.

Cramer reports that a synthetic toxin detector has been developed recently, and she argues that, for the sake of the crabs and birds, the biomedical industry should use it more widely.

The list of challenges facing knots is long, but Cramer writes of many people who stand for the birds, people she says can “renew the web of life at the edge of the sea.”