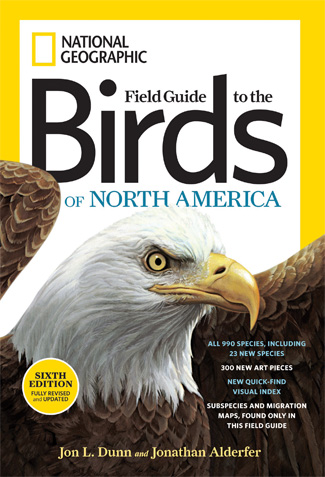 There is nothing permanent except change. To keep up with the rapidly evolving world of North American birds, you need an up-to-date field guide. The most current printed guide available, the sixth edition of the National Geographic Field Guide to the Birds of North America, which arrived in bookstores November 1, 2011, still relies on illustrations, not photographs, but it’s longer than the fifth, and it contains descriptions of no fewer than 990 species, 23 more than the earlier edition. (The additions are all new to North America.) Recent taxonomic changes made by the American Ornithologists’ Union are here, as are updated range maps and fun new subspecies maps. Shortly before the guide’s release, I interviewed lead illustrator Jonathan Alderfer. Here is our conversation.

Five years have passed since you published the fifth edition of the field guide. Why did you decide to update it now?

One of the hallmarks of the Nat Geo guide is that we update it regularly — every birder I know wants to have the most up-to-date guide possible. The sixth edition has loads of important new material: improved art, the most current identification criteria, 72 more pages, updated maps, all recent (2011) changes in taxonomy and nomenclature, new design features, even new species that have recently been found for the first time in North America (such as Sungrebe in 2008, Bare-throated Tiger-Heron and Gray-collared Becard in 2009, and Amazon Kingfisher in 2010, among others). Not since the first edition have there been so many improvements.

How did you and your co-author Jon Dunn approach this edition? How did you divide the work?

Jon and I both work with the artists, and Jon handles most of the text updates and reviews all the new map material. Since I work for National Geographic in Washington, D.C., I handle many of the day-to-day problems that come up when putting together such a complicated book.

What changes are you most proud of?

The new art and maps are outstanding improvements. Equally important, Jon edited and substantially rewrote the text, taking advantage of the additional 72 pages in this new edition. The additional space also allowed the art more room to “breathe” and for new field mark annotations on the art pages. This guide continues to evolve, almost like a living organism. Some changes are subtle, some dramatic, but all have been honed by feedback from both expert and beginning birders and our desire to turn out the best possible bird guide.

You added 300 new illustrations. What birds or families do they depict?

Additionally, the Nat Geo guide is the only guide that has text and illustrations of all accidental species (in a separate section in the back), so we had to keep that part of the book current. Some of the most recent additions to the accidentals are Solitary Snipe (Attu, Alaska), Amazon Kingfisher (Laredo, Texas), and Red-legged Thrush (Melbourne Beach, Florida) — all species that showed up in North America for the first time in 2010.

How did you decide which species needed new paintings?

It’s an involved process — we always want to do more than we’re able to, and we don’t always agree on what to do, at least at first. The Nat Geo guide was the state of the art when it first came out in 1983, but over the years, some illustrations have started to look dated and a few were even inaccurate. Jon and I both made wish lists of illustrations we would like to replace, and we also asked many birders for their opinions. We had to take the available time and budget into account, even the artists’ preferences, but eventually we settled on a list.

A little about the art process: Each artist — five worked on this edition — is challenged to paint an image that reflects what a birder sees in the field, based on personal field experience, sketches, photographic references, museum skins, and critiques from Jon and me.

The advances in bird photography have been especially useful, allowing the artists to consult hundreds of images, while checking for things like proper proportions or feather alignment details. Even though a series of photographs can reveal minute details, most birders eventually come to realize that illustrations are more helpful than photographs in a field guide.

Art distills the image of a bird into what our brains experience rather than what a camera sees in a single instant, and illustrations are much easier to compare to each other. (Full disclosure, I own most North American bird field guides — both photographic and illustrated — and love to look at great bird photographs.)

You’ve included 40 range maps for subspecies. Why are subspecies important?

Part of the fun and challenge of birding is observing field-recognizable subspecies. Some variation is simple, as in the two subspecies of Willet, and some is very complex, as in Dark-eyed Junco. (Some species have many named subspecies that show very subtle differences and are nearly impossible to identify in the field — for example, Song Sparrow — and are beyond the scope of our guide.)

In most cases, subspecies vary geographically — they have discrete breeding ranges — so it makes perfect sense to show those ranges on maps. Our new, larger-scale, subspecies maps appear in a section at the back of the guide; in addition, 59 species have brief subspecies annotations on the maps within the main text. In recent decades, a number of subspecies or subspecies groups have been elevated to full species status — Oak, Juniper, and Black-crested Titmice; California Gnatcatcher; and Canyon and California Towhees are just a few that come to mind — and more splits are sure to come.

Who made the guide’s range maps?

Paul Lehman, a leading expert on the distribution of North American birds and a well-known birder, has been the primary researcher of all the maps in recent editions of the Nat Geo guide. Paul also has a dedicated cadre of correspondents all over the continent who advise him. For the first time, all of our maps now show migration ranges for migratory species. Paul and the mapping team at National Geographic spent considerable time optimizing the size, color, and orientation of the maps. The results are really stunning.

As you work on new editions of the guide, how much are birds’ ranges changing?

Bird ranges do change, for a variety of reasons. Environmental problems such as habitat destruction and forest fragmentation continue to cause range contractions in a number of species. Sometimes this shows up on our range maps, and other times the ranges don’t change, but a species becomes scarcer within its range. Sometimes new information (like a new breeding bird atlas) becomes available that can change a range boundary, if only in a minor way. The most dramatic map change has been the rapid expansion of Eurasian Collared-Dove across North America.

Will the National Geographic iPhone field guide app be updated with the content from this edition of the guide?

Plans are still evolving, but since the iPhone app is based on the third edition, everyone wants to do a new app, one that will also have an iPad version. Readers can follow me on Twitter at @NatGeoBirder for ongoing updates about the new guide and other National Geographic birding books and apps. (Update: The National Geographic Birds app for iPhone and iPad is now available.) Originally Published October 3, 2011