Become a member and get exclusive access to articles, contests and more!
Start Your Free Trial
BirdWatching  •  Gear & Products  •  Books  •  A touching memoir from a hummingbird rehabber in Hollywood 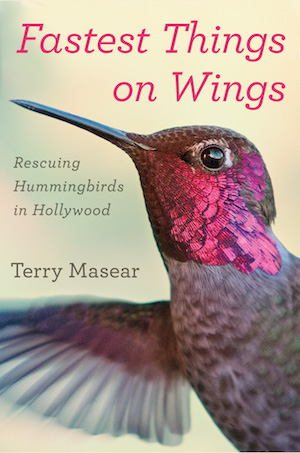 More than 40 varied families of birds have been recorded in North America north of Mexico. Each includes species that reward study and delight the eye. Many inspire not only the maintenance of feeding stations and nest boxes but also selfless acts of citizen science and rescue and rehabilitation. Yet none elicits as much heartfelt emotion as the hummingbirds.

Sixteen species breed in United States, and five — Allen’s, Anna’s, Black-chinned, Broad-tailed, and Rufous — nest in the Los Angeles area, where rehabber Terry Masear has been caring for the injured and orphaned among them, and Costa’s and Calliope, too, since 2005. An intensive care unit with an incubator stands at the ready in the garage of her West Hollywood home. An aviary is on the patio. And every nesting season, her phone rings off the hook.

In this well-written memoir, she tells the story of Gabriel, a male Anna’s Hummingbird rescued from danger in the middle of busy Rodeo Drive, and Pepper, a female Anna’s injured on a film set. Along the way, Masear shares an abundance of knowledge about hummingbirds’ mating and feeding habits, their incredible flying abilities and migratory journeys, and what they need to heal and thrive. But her observations about the rescuers are just as interesting. “You can learn a lot about someone by his reaction to a helpless hummingbird in need of rescue,” she writes. “In fact, you can find out just about everything you need to know about a person.”

Almost everyone who calls her hotline gushes about how much they love hummingbirds, and even the least sentimental — jaded filmmakers, hard-headed corporate execs, construction workers, crime-scene investigators, a guitarist for a heavy-metal band — break down when birds can not be saved. “If one lesson had sunk in over the past few years,” she writes, “it was that nobody wants to watch a hummingbird die. That’s where rehabbers come in. We take the pain for everybody.”