Become a member and get exclusive access to articles, contests and more!
Start Your Free Trial
BirdWatching  •  Gear & Products  •  Binoculars  •  What you need to know about waterproofing 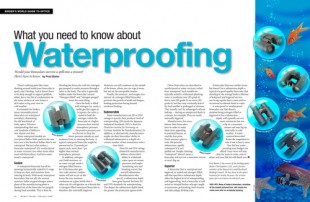 There’s nothing quite like water sloshing around inside your binocular to spoil a day’s birding. And it doesn’t have to be deep enough to support goldfish, either. Just a tiny bit of condensation on the inner surfaces of your lenses is all it takes to fog your view in cold weather.

Fortunately for birders, many reasonably priced binoculars are waterproof nowadays, eliminating the old heartbreak of leaky optics. Effective waterproofing that once cost hundreds of dollars is now almost cost-free.

Many waterproof models are even priced below $100, and it is the rare bino over a few hundred dollars that is not waterproof. But just what makes a binocular waterproof? (Or weatherproof or water-resistant, two other terms often used with binoculars.) And how waterproof is waterproof?

Sealed
A waterproof binocular has all its openings hermetically sealed by O-rings to keep air, dust, and moisture from entering its body. With many waterproof binoculars (but not all), the normal moisture-laden oxygen/nitrogen atmos­phere of the manufacturing plant is flushed out of the binocular (or purged) during final assembly. This is done by flooding the binocular with dry nitrogen gas pumped in under pressure through a valve in the body. The valve is generally hidden under the binocular’s armor. “Nitrogen-filled” and “nitrogen-purged” mean the same thing.

Once the body is filled with nitrogen (or, rarely, a noble gas like argon or krypton), the valve is sealed to hold the nitrogen within the binocular at a higher pressure than normal atmospheric pressure. The positive pressure acts as a barrier to keep the lower-pressure outside air and moisture from re-entering the body. A typical waterproof binocular might be pressurized to 22 pounds per square inch, more than 7 psi higher than normal atmospheric pressure.

In addition, nitrogen can’t hold moisture, so no water can get inside a nitrogen-filled binocular. If the binocular gets very cold, interior condensation will not occur on the lenses the way moisture condenses on a glass bottle that is taken out of a refrigerator on a humid day. A nitrogen-filled waterproof binocular is therefore also internally fogproof. Moisture can still condense on the outside of the lenses, where you can wipe it away, but not on the unwipeable insides.

Finally, the moisture- and oxygen-free interior of a nitrogen-filled binocular prevents the growth of mold and fungus, lending protection during humid rainforest birding.

Submersible
Some manufacturers use JIS or DIN ratings to specify their products’ level of waterproofing. (JIS stands for Japanese Industrial Standards. DIN is short forDeutsches Institut für Normung, or German Institute for Standardization.) In addition, or alternatively, manufacturers might cite their binoculars’ ability to withstand submersion to a depth of a certain number of feet (sometimes with a time limit).

Most JIS and DIN ratings claimed by manufacturers address a binocular’s ability to withstand water spray at various pressures and angles (simulating rain and breaking waves), but not full submersion. Manufacturers who specify a submersion depth have gone beyond the basic JIS and DIN standards for waterproofing. The deeper the submersion depth listed, the greater the protection against leaks.

Often, binoculars are described as weatherproof or water-resistant, rather than waterproof. Such models are typically sealed to withstand splashing water or moderate rain (JIS grade 4), heavy rain (JIS grade 5), or waves (JIS grade 6), but they may eventually leak if the bad weather is prolonged or extreme. They usually can’t be submerged without leaking – during an unexpected dunk in a stream, for example. They are rarely internally fogproof.

Manufacturers list every feature their binoculars have in order to make them more appealing to potential buyers, so read the fine print. Don’t assume a glass is truly 100-percent submersion-capable waterproof if it isn’t spelled out. Simply claiming “waterproof” doesn’t mean a binocular will survive a mountain stream or won’t fog up.

Superior
A binocular that is waterproof and fogproof, or sealed and nitrogen-filled, and that specifies a submersion depth, offers the highest level of waterproofing and fogproofing. Such a binocular is well suited to intrepid birders who get caught in monsoons, go kayaking, ford streams, and take pelagic birding trips.

A binocular that uses similar terms but doesn’t list a submersion depth is typical of a good-quality binocular that should give the average birder a lifetime of leakproof and fogproof service, surviving regular heavy rains and an occasional accidental dunk in water.

A waterproof or weatherproof binocular, one that doesn’t mention being nitrogen-filled or fogproof or list a submersion depth, will typically survive most rainstorms but not a dip in a mountain stream and may fog up internally in cold weather. A water-resistant binocular? Resist the temptation to take it out in heavy rains.

Buy the best waterproofing your budget can afford. Your views will stay clear for years to come, rain or shine, and your life list will thank you.

Fred Bieler is the owner of the birding optics dealer Christophers, Ltd., and a former member of the Bausch & Lomb/Bushnell Birding Council. He has been in the optics business for nearly 30 years. He reviews optics for www.betterviewdesired.com.