The name of the Wandering Tattler sounds fanciful and fictional, but it’s actually a fitting title. “Wandering” is no exaggeration. The coastal wintering range of this sandpiper spans the Pacific, from California and Ecuador west to Australia, and just about every archipelago and island in between: Hawaii, Galapagos, Polynesia, Samoa, Fiji, and more. “Tattler” is appropriate, too: When this modest-looking bird takes flight from a wave-washed rock, its loud, ringing trill ensures that everyone will know about it.

In terms of habitat and surroundings, the Wandering Tattler leads a double life. Most birders see it in the non-breeding season, along the coast on rocky shorelines. For breeding, however, it goes to the interior of Alaska and parts of northwestern Canada and extreme eastern Siberia, nesting near streams in the mountains. The first nest was not discovered until 1923, in the area that’s now Denali National Park in central Alaska, and its breeding behavior still has not been studied thoroughly.

Curiously, this change of scene — rocky shores in winter, Alaska mountains in summer — is also practiced by another sandpiper, the Surfbird, although it clings to the coasts of the Americas instead of crossing to the far side of the Pacific.

For North American birders, the Wandering Tattler is essentially a Pacific Coast specialty. A handful of strays have appeared east to the Texas coast, Hudson Bay, the Great Lakes, and even Massachusetts, so it’s a species that every birder should keep in mind. Along the California coast, the bird is present for most of the year, with higher numbers in late April and early May and again from late July through September. Only small numbers stay through winter, and very few are found in early summer.

Within this coastal range, the Wandering Tattler is seldom seen foraging on mudflats or sandy beaches because it’s strongly tied to rocky shorelines. It’s typical to see one moving rapidly over wet boulders near the breaking waves, picking at invertebrates and sometimes chasing small crabs. As it moves, the tattler “teeters,” bobbing its hindquarters or its whole body up and down, similar to the actions of a Spotted Sandpiper. Often the tattler forages in the same general areas as flocks of Black Turnstones and Surfbirds, but it doesn’t join the flocks. It keeps to itself, and if the birds are flushed, the tattler will fly away separately, giving a loud, ringing cry.

Compared to other “rockpipers” on the Pacific Coast, the tattler is distinctly longer-billed than the turnstones or Surfbird, smoother gray above than the Rock Sandpiper, and more active in its foraging than any of these birds. Its behavior makes it superficially most similar to Spotted Sandpiper, which also may forage along rocky shorelines in the non-breeding season. See the text accompanying Brian Small’s fine photos in this column for pointers on how to identify Wandering Tattlers in all plumages.

What to look for

Size and shape. Medium-sized sandpiper with fairly short legs and thin, straight bill.
Face pattern. Thick dark line through the lores (from bill to eye) with a poorly defined pale supralora line (short eyebrow) above it.
Pattern of underparts. Breeding adult heavily barred gray and white. Juvenile and winter adult with gray chest and flanks, white belly.
Habitat and behavior. Favors rocky shorelines at ocean’s edge for most of year. Walks actively on rocks, bobbing hindquarters up and down.
Flight pattern. Entirely gray above, with no white on wings, rump, or tail, unlike most shorebirds.

Among shorebirds occurring commonly in North America, the pattern of the Wandering Tattler in breeding plumage is unique. Nothing else comes close to its pattern of heavily barred underparts and completely smooth, unmarked gray upperparts. Even with this distinctive pattern, however, the shape of the bird is a major field mark, as with all shorebirds. Notice the overall horizontal appearance, with relatively long wings and short stocky legs, and the straight bill, distinctly longer than the head. It might seem like an easy ID. But especially in Alaska, birders need to be aware of a close relative, Gray-tailed Tattler, which wanders in from Asia; it’s discussed in the sidebar on the next page.

As with most other sandpipers, juvenile Wandering Tattlers in late summer and fall differ from adults in the appearance of the upperparts. Their cleaner look results partly from the fact that the major scapular and covert feathers are more uniform in shape, and slightly smaller than those of adults. In addition, the juvenile tattler has a pattern of fine pale spots along the edges and tips of most of the coverts, as well as pale spots on the edges of the tertials, while those feathers are simply plain gray on adults. At a distance, this subtle pattern is hard to see, and the juvenile simply looks plain and gray, well camouflaged against the usual colors of coastal rocks.

In the field, the main ID contender with Wandering Tattler is the Spotted Sandpiper in winter plumage. Its walking behavior — bobbing the rear part of the body up and down — is surprisingly similar. Both birds have mostly plain upperparts, fairly short yellow legs, and a similar face pattern. The overall color tone differs: The sandpiper looks browner, and the tattler wears grayer tones, but this can be hard to judge in the harsh light along an open shoreline. On Spotted Sandpiper, a white mark extending up in front of the wing is usually a good field mark. In flight, it shows a conspicuous white wing stripe, a clear distinction from the tattler’s unmarked gray wings.

Its total breeding range is small, and its population is thought to be fewer than 25,000, but the wintering range of the Wandering Tattler is very thinly spread across edges and islands of the vast Pacific Ocean. Most sandpipers of rocky shorelines (including Black Turnstone, Ruddy Turnstone, Surfbird, and Rock Sandpiper) are regularly seen in flocks, but Wandering Tattlers are usually seen singly. A lone gray bird foraging among gray rocks is easy to overlook. Often, we notice the tattler first when it takes flight, with loud “tattling” calls. Its flight pattern — plain gray above, with no white on the wings, rump, or tail — is a good distinction from other shorebirds that share the same habitat.

The Wandering Tattler might seem unique among North American sandpipers, but it has a close relative, Gray-tailed Tattler. It breeds in Siberia and regularly shows up as a migrant on western Alaskan islands, sometimes on the mainland, and very rarely south of Alaska.

Gray-tailed and Wandering Tattlers are similar in all plum­ages, not always safely identifiable by sight. Gray-tailed tends to be paler gray above. In breeding plumage, the barring on its underparts is less extensive, leaving part of the belly white, but a Wandering in molt can look similar. The juvenile Gray-tailed has slightly larger white spots on the edges of the scapulars, coverts, and tertials. Winter plumaged birds are usually whiter on the flanks, not strongly washed with gray as in Wandering Tattler. In all plum­ages, the pale eyebrow on Gray-tailed tends to be wider.

In addition, Gray-tailed Tattler has less affinity for rocky places and is more likely to forage on open mudflats or sandy areas. Perhaps reflecting this difference, Wandering Tattler has subtly thicker legs, which could be an adaptation for clambering over rough surfaces.

To identify a tattler out of range, though, it would be important to hear the voice. Wandering Tattler gives a rippling series of clear, piping notes in rapid succession, tu-tu-tu-tu-tu. The call of the Gray-tailed is a rising, whistled too-weeap, an utterly different sound, belying the similar appearance of the species.

American Sparrow shares similar traits to other sparrows. Use these tips to correctly identify it.

How sleeping postures can help you identify distant ducks, loons, grebes, and other waterbirds. 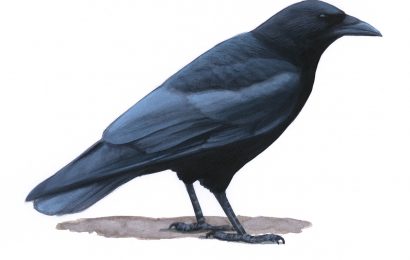 A closer look at crows.