Of all the marvels of the living world, few are as astonishing as the annual migrations of birds. The idea that a tiny songbird, weighing less than half an ounce, can travel thousands of miles under its own power year after year is almost too great for the human mind to comprehend. The precise rhythm of these comings and goings has been noted as early as the writing of the Old Testament, when the prophet Jeremiah alluded to the “appointed times” of the “stork in the heavens.”

Although humans have long observed that birds appear and reappear at certain times of year, we haven’t always understood how it happens. Aristotle surmised that swallows hibernated in the ground, an idea that would persist into modern times. He also thought that certain birds annually transformed from one species to another. It wasn’t until the early 19th century, when a White Stork — likely the very same species Jeremiah wrote about thousands of years earlier — was found in what is now Germany with a 30-inch wooden spear embedded in its neck that people began to suspect migration. The spear was made of African wood, providing the first hard evidence of long-distance, intercontinental bird migration (and an astonishing example, considering the bird’s injury).

That was in 1822. So much has changed since then in our understanding of the world. We now know, through techniques like banding and technologies like GPS tracking and satellite imagery, that hundreds of bird species migrate huge distances between breeding grounds on one continent and wintering grounds on another. These epic journeys happen twice a year and, for many species, they happen mainly at night.

Not all birds migrate at night, of course. Many of us have witnessed the daytime flights of Broad-winged Hawks or American White Pelicans — large soaring birds taking advantage of thermals rising from the earth’s surface — or Tree Swallows — strong, swift fliers adept at dodging predators and catching a meal on the wing. Diurnal migrants are in the minority, however. For most bird species, it is best to migrate under the cover of darkness.

Night-migrating birds include ducks and geese, plovers and sandpipers, and songbirds of all kinds. The species fly at night to take advantage of cooler temperatures, calmer skies, and fewer predators. They use celestial cues such as the stars to help them navigate. Nocturnal migration is a behavior that millennia of evolution have hardwired into the neural circuits of our feathered friends. Even captive birds grow anxious and restless on fall nights, fluttering their wings and jumping at their cage doors, a behavior known as Zugunruhe, or migratory restlessness. Such birds feel the ancestral urge to take to the skies and move.

No doubt migrating at night has many advantages for birds, significantly increasing the chances of their survival. But there is a relatively new disadvantage of nighttime travel: the ever-increasing presence of artificial lights.

It is estimated that more than 80 percent of the human population lives under a lit sky — a sky polluted by artificial light. Nine out of 10 people living in the United States have never seen the stars of the Milky Way. Since the invention of the incandescent light bulb in the late 19th century, artificial light has taken over our world, and even now, it is increasing by at least 2 percent a year.

Light pollution is generally defined as excessive or misdirected artificial light that alters the natural patterns of light and dark. Sources of light pollution include streetlights, interior and exterior lighting of homes and other buildings, communications towers, and drilling rigs. They include cars, stadium lights, neon signs, and other infrastructure. Artificial light is a necessary evil of modern life. And it presents a problem for birds.

Migrating birds are attracted to bright areas. Drawn off course by the lights, they not only burn extra energy but also end up in places they shouldn’t be — well-lit urban areas fraught with a lot more dangers than the darker, more natural places where they would normally stop. Finding themselves in a world of glass and steel the morning after a long flight, the birds, exhausted and famished, must now navigate this unnatural jungle to find a decent place to rest and refuel. Many birds are killed in building collisions. Others die at the mouths of cats. For the ones that survive, the quality of habitat in an urban landscape is not always ideal, making it harder for them to get the food they need to continue their travels.

It is not just migration that is affected by light pollution. Artificial light at night impacts birds in other ways, too. Several species of petrels and other seabirds are in serious trouble largely because of artificial lights that attract, disorient, and ultimately kill thousands of newly fledged birds every year. American Robins and other songbirds in areas with high levels of artificial light are beginning their morning chorus earlier, often hours before dawn, and thus singing for longer periods. Scissor-tailed Flycatchers and other typically diurnal foragers catch insects at streetlights for hours into the night. Some species, such as Burrowing Owls, are colonizing cities for this same reason — to take advantage of increased prey attracted to lights. More studies are needed to determine whether these changes in behavior are positive or negative for the species. The advent of artificial light is relatively recent history, and we still don’t know a lot about its specific effects on the natural world.

What we do know is that, overall, light pollution has a significant negative impact on birds, especially during migration. And solutions to this problem are readily available for individuals, communities, and governments.

People can help to reduce light pollution in several ways. The best thing is to turn off all nonessential nighttime lights around homes and places of business. For essential lights, such as security lighting, use motion detectors to limit usage, and always use the minimum wattage necessary for the task at hand. Direct all lighting downward, place lights to illuminate the ground, and use shielding to prevent shining into the sky. Indoor lighting can present a problem, too, so it’s a good idea to close blinds or curtains to prevent light from shining out into the night.

Of course, these simple actions are just a start. To really put a dent in the problem of light pollution, large-scale change is needed. And some of that is already happening.

Lights Out programs across the United States and Canada encourage building owners to turn out lights during heavy migration periods in spring and fall. The first of these programs were started in Chicago and Toronto in the 1990s, and now about 50 Lights Out programs are up and running throughout North America.

Nineteen U.S. states currently have laws in place to promote environmentally friendly lighting practices. Most of these regulations are limited to state-owned properties and public roadways, but some, such as in New Mexico and Arizona, are aimed at reducing light pollution across their states — and more states are following suit. In early 2022, New York senators introduced legislation that requires most nonessential outdoor lighting to be extinguished after 11 p.m., motion-activated, or covered by an external shield. Called the Dark Skies Protection Act, the bill was in committee as of this writing.

It is worth noting that these laws benefit more than just birds. Reduced light pollution reduces energy consumption. Many of us remember being told by a parent or grandparent always to turn out the light when leaving an empty room to reduce energy. The same concept holds true for outdoor lighting. The International Dark-Sky Association estimates that nearly 30 percent of outdoor lighting in the United States is wasted, costing billions of dollars in electricity and pumping millions of tons of greenhouse gases into the atmosphere. When smart outdoor lighting strategies are implemented, we all benefit.

We can all play a role in moving our communities and regions toward large-scale changes that reduce light pollution. It starts with awareness and education.

One way to take part in raising awareness is to join or host a World Migratory Bird Day event. World Migratory Bird Day (formerly known as International Migratory Bird Day) is an annual global campaign that celebrates the migration of birds across countries and continents. Every year, the campaign centers around a particular conservation theme — past themes have included plastic pollution and climate change. This year’s theme is “Dim the Lights for Birds at Night,” focusing on light pollution. Virtual and in-person events are taking place throughout 2022 to educate communities about the negative impacts of artificial light and the steps that can be taken to reduce them. Environment for the Americas, the lead organization behind the campaign, produces bilingual posters, pamphlets, and digital resources that are distributed throughout the Western Hemisphere to promote conservation through education. A schedule of World Migratory Bird Day events and information about available resources can be found at migratorybirdday.org.

Another way to get involved with this issue is through a community science program. One such program is Globe at Night, a project that invites anyone, anywhere to participate by measuring their night-sky brightness and submitting their observations online. Hundreds of thousands of measurements from people in nearly every country in the world have contributed to the project. More information and access to the data are available at globeatnight.org.

As our world continues to change, it’s imperative that we take notice before it’s too late. Light pollution is just one of many environmental problems we currently face. Each of us can and should take part in raising awareness and supporting actions that reduce these problems impacting birds and our shared world.

Lights Out programs across North America

Why some birds migrate while their close relatives do not

Counts to take place between December 14 and January 5.

Avoid the pain of missed or poor photos with these tips for shooting through panes of glass. 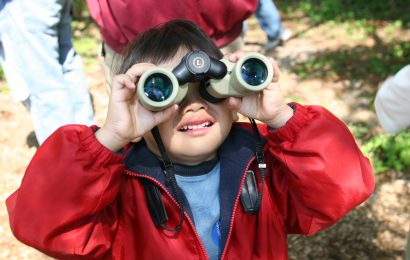