Become a member and get exclusive access to articles, contests and more!
Start Your Free Trial
BirdWatching  •  Birding for Beginners  •  Helping Birds  •  David Allen Sibley describes why birds hit windows and what we can do to prevent window strikes 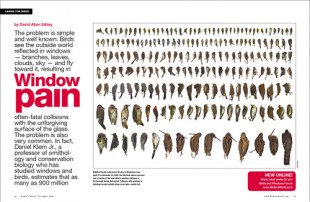 The problem is simple and well known: Birds see the outside world reflected in windows — branches, leaves, clouds, sky — and fly toward it, resulting in often-fatal collisions with the unforgiving surface of the glass. The problem is also very common. In fact, Daniel Klem Jr., a professor of ornithol­ogy and conservation biology who has studied windows and birds, estimates that as many as 900 million birds are killed in window collisions in the United States each year. This article explores the reasons why birds hit windows and what potential solutions you can implement to prevent them.

I was forced to confront the problem directly a few years ago, when I moved into a house with lots of large glass windows. Since I like to keep many bird feeders and I enjoy watching birds, I loved the windows, but they were causing the death of many birds. What to do?

Why birds hit windows and what you can do about it: No quick and easy fix

With a bit of research, I learned that the number of suggested solutions to the problem was large. I also learned that there is no quick and easy fix. Virtually all of the suggestions were either ineffective (placing falcon-silhouette decals on window panes, for example), unsightly (dangling CDs on strings), labor-intensive (hanging exterior screens), or prohibitively expensive (installing new windows angled to reflect the ground). Many suggestions were also impractical for the windows I needed to guard — sliding glass doors and tall casement windows.

I did learn that it’s best to place feeders either very close to windows — closer than two feet — or more than 30 feet away. Most collisions at my house occurred at feeders about 10 feet from windows. In the end, I took the easy and fairly effective step of moving them farther away, and I removed feeders entirely from the side of the house where most collisions happened. I also hung lengths of white string every 12-18 inches in front of the worst windows. These changes (perhaps along with not washing the glass) reduced the collisions to just a few each year.

Since that was still too many, I continued to work on the problem. A few collisions a year, only a few of which result in immediate death, may not seem like much, but research has shown that at least half of the birds that fly away from window collisions die soon afterward from brain injuries. (Despite what most people think, birds involved in window collisions rarely break their necks.) Klem’s estimate of up to 900 million birds is based on just a few birds per house multiplied by the huge number of houses spread across the country. The problem is particularly challenging because it is so diffuse; solving it requires changing hundreds of millions of windows.

In the long term, perhaps, bird-safe glass or exterior window screens will be used for all new construction. This step would eliminate the problem eventually. But in the short term, we need a solution that is cheap, easy, and nearly invisible — something that we can all use and recommend to friends and neighbors, something to be put into use immediately.

To stop birds from hitting the glass, we have two options: eliminate the reflection (with dirt or soap, for example), or break the reflection into openings so small that birds think they cannot fly through. Windows divided into smaller panes have far fewer bird strikes than large plate-glass windows, but even small panes can deceive birds that are accustomed to flying through dense foliage, such as Ovenbirds and White-throated Sparrows — both common window-strike victims in eastern North America.

Any reflection larger than four inches wide or two inches high presents a possible flight path, and birds fleeing a hawk or other danger might try to fly through even smaller openings. This is why single falcon-silhouette decals on windows are ineffective: They simply don’t present an obstacle to small birds. The challenge is to reduce the reflection without ruining the view.

With that in mind, last winter I tried some experiments, which I reported on my blog. I had success simply by drawing vertical lines with a yellow highlighter on the inside of the glass. (The ink fluoresces when exposed to ultraviolet light, making it more noticeable, perhaps, to birds.) The lines reduced collisions by about 75 percent for a week but did not work on a cloudy day. Several readers of my blog also tried it and reported good results.

Still looking for a more effective solution, I loosely tied strands of monofilament fishing line across the outside of the window from top to bottom about three inches apart. The strands eliminated collisions entirely and were easy to live with (unlike the distracting white string I had tried earlier), but they were not easy to install, and in what became a familiar theme of mixed results, one reader reported that she had previously tried it on her windows with no success. It seems that what works in one location won’t necessarily work elsewhere.

Ultimately, the surest solution is to install exterior screens or netting, which reduce the reflection and cause birds that fly toward the window to bounce off unharmed. The Bird Screen Company makes easy-to-install screens for just this purpose. Some readers told me they fashioned their own “safety nets” with plastic garden netting hung in front of windows.

If you have a serious bird-window problem, don’t hesitate to address it. Moving bird feeders can provide quick relief, and installing screens or netting on the most troublesome windows is a good idea. If screens aren’t right for your house, try something!

My highlighter experiments — and the responses from readers who have had success with other treatments applied to the inside of the glass — make me hopeful that easy and inexpensive solutions to this problem exist. We have a lot to learn. Sharing our ideas and experiences could save the lives of countless birds.

David Sibley is the author of The Sibley Guide to Birds. His column “ID Toolkit’ appears in every issue of BirdWatching.

If you would like to read more about the problem of birds and windows, I highly recommend Daniel Klem’s thorough 2006 review:
Glass: A deadly conservation issue for birds

The American Bird Conservancy also has an excellent summary and suggested actions:
Mortality threat to birds: Collisions with buildings

Audubon Chicago, working with the City of Chicago, developed a city-wide program to reduce bird collisions by turning off decorative lights during spring and fall migrations. The effort led to an important conference.
Lights Out Chicago

And New York City Audubon, another leader on the issue, published a manual for developers, architects, engineers, and other professionals who want to construct bird-safe buildings:
Bird-Safe Building Guidelines

What have you tried to prevent birds from hitting windows? Tell us in a comment or check out our article for information on products that prevent window strikes. Originally Published November 1, 2008

As hot weather intensifies worldwide, those of us who can help birds may take some satisfaction in easing their suffering during hard times.

Oregon State University researchers have some good news for the well-meaning masses who place bird feeders in their yards: The small songbirds who visit the … END_OF_DOCUMENT_TOKEN_TO_BE_REPLACED