Become a member and get exclusive access to articles, contests and more!
Start Your Free Trial
BirdWatching  •  Birding for Beginners  •  Attracting Birds  •  You can attract screech-owls to your yard

The best way to see adorable but secretive screech-owls is to attract them to your yard. It’s easier than you think, Kevin Walsh writes in our December 2016 issue.

All that’s required, Walsh says, is a well-placed nest box.

“As a longtime hiker and birdwatcher, I know from experience how challenging it can be to spot screech-owls. Small, nocturnal, and elusive, they are occasionally heard but seldom seen,” he writes. “Well, that all changed in a dramatic way after I built a nest box. Now it’s a rare day when I don’t see a screech-owl or two.”

Walsh says he followed the nest-box plans provided in the book Woodworking for Wildlife, Carrol Henderson’s indispensable guide. (See the blue box below.) Photographer Jeffrey Crawn tells us he found the Eastern Screech-Owl above in nest box intended for ducks. He took the picture the last day of October 2014. 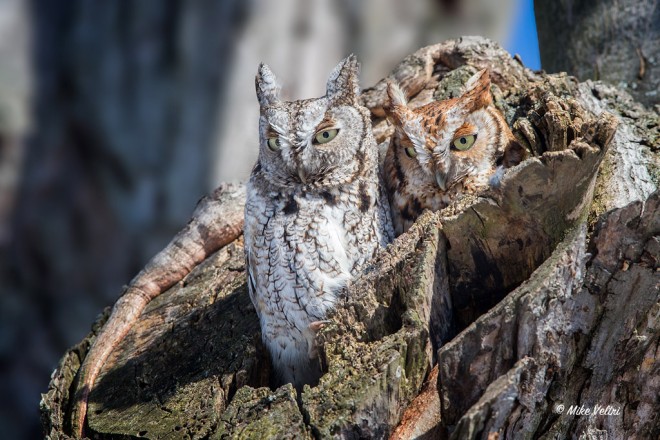 One of the many interesting tidbits that Walsh passes along is that screech-owls don’t seem to pay much attention to variations in their plumage. Red-morph and gray-morph screech-owls will nest together. “Currently, my female is gray, and my male is the orange of a red fox,” he writes. Photographer Mike Veltri recorded a similar pairing at the nest pictured above. 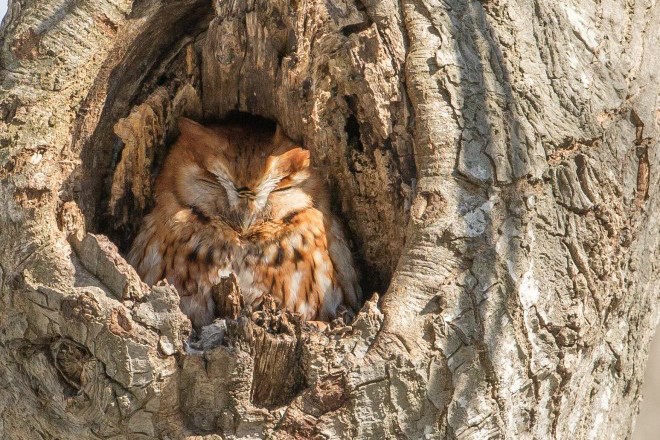 The very red Eastern Screech-Owl above was photographed by Sam Maggio. A picture of contentment, the owl was basking in warm sun on a cool day. 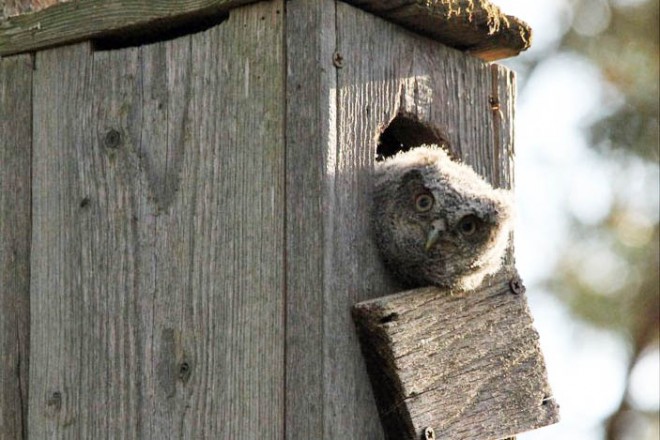 The fuzzy-headed owlet above keeps careful watch of everything in Sena Mulder’s yard in Wyoming, Michigan, near Grand Rapids. The youngster was only 15 feet away when Mulder took the photo.

Homes for birds and animals

Woodworking for Wildlife (164 pages, soft cover, $19.95) contains plans for nest boxes for wildlife ranging from screech-owls and mergansers to toads and bumblebees, as well as instructions on placing and maintaining boxes, deterring predators, and setting up remote cameras.

The author, Carrol L. Henderson, is the nongame wildlife program supervisor for the Minnesota Department of Natural Resources and a longtime contributor to BirdWatching. In our June 2015 issue, he described birding in Cuba. In May 2016, he was awarded the Frances K. Hutchinson Medal, one of the highest honors bestowed by the Garden Club of America.

In 2022, the impact of light pollution is the focus of World Migratory Bird Day, an annual global campaign that celebrates the migration of birds … END_OF_DOCUMENT_TOKEN_TO_BE_REPLACED

See how many migratory birds are passing over your county with new Migration Dashboard feature.

Witness the wonders of nature and do some good at the same time!